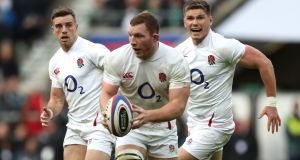 For such a specialist England’s Sam Underhill seems dogmatically open minded about playing at seven. As a flanker, who debuted in the Premiership at 18-years-old, he has come to believe that England have a special group of backrow players and that any of them can play in any other backrow position.

Multi-positional has become a buzz phrase even for the definitive openside. The former politics and economics student concedes that he will never be able to carry the ball like Billy Vunipola but others like Jack Willis or Tom Curry could set up their stall just about where ever they wanted.

Rested last week as England crushed Georgia 40-0, Eddie Jones has Underhill in mind to do what he does most efficiently against Ireland. Maro Itoje, Jack Willis and Vunipola were the Georgian backrow starters with Ben Earl and Tom Curry on the bench.

Rugged, destructive, unflinching are words that fill the room around Underhill. They rarely change. Add a dab of trickling blood and his portrait of the modern rugby baton round is complete. Just don’t pigeon hole the openside as a seven.

“I’m not entirely convinced by the traditional backrow mould,” he says. “If you say what is a traditional seven. It’s probably someone that’s very good in terms of their break down involvements on both sides of the ball, someone that’s a good link player, support player.

There is a strong sense of self worth among the backrow, faith in the idea of a growing force that’s not so much arrogant as respectful of each other’s capability. It is there. It does exist. Do you think of it in any way that you have something special that could set you, as a group, apart from the rest of the world, Underhill was asked.

Without flinching or nervously shifting in his chair, the 24-year-old answered “I think so.” There’s a willingness to think big and it goes to the heart of England’s mentality, which is about players less inflating their worth as believing that they know the measure of it.

They are not afraid to see themselves in worldly terms and while the backrow may or may not set itself apart from the rest of the rugby world, the three players picked by Eddie Jones to start against Ireland in Twickenham will see themselves in that way.

“There is definitely a good feeling round the group, more so than any group of backrow I’ve been involved in,” says Underhill. “Just in how competitive it is. Also off the back of that, there is no one who thinks they should always be in.

“We all acknowledge the ability of those around us. It’s hard not to. We have an awful lot of respect for one and other as players on and off the pitch. That translates well onto the pitch. You push each other. You are not afraid to compete with one and other and also that competition is coming from a good place.”

From that same space in his head he speaks of Ireland with a respect similar to that he shares with his teammates. There are few secrets in international rugby and whether it is CJ Stander, Peter O’Mahony, Will Connors, Josh van der Flier or Calen Doris on the other side of the scrum, the Bath flanker knows what is coming at England. His deference comes from knowing if Ireland can get it right, England will be challenged to stop them.

“The obvious one is that it’s going to be a physical battle,” he says of Ireland. “I think set-piece wise they are a pretty well drilled outfit. They have a well functioning lineout. They’ve got a good scrum. I think they have some pretty key ball carriers. They give them so much momentum. They give them the ability to play. Those guys are pretty essential for them.

“They are one of the more challenging sides at how they go at it. They’ll obviously go pretty hard at the breakdown. They’ve got a lot of guys who are good over the ball. In terms of the breakdown as a point of contention throughout the game, we are going to have to really be on it.”

The breakdown he sees as “another set-piece.” What seems like chaos is structured in his way of thinking. The twist is what makes Underhill stand out is his unstructured play, the high tackle counts, murderous physicality. He has spoken about how his body will be “in bits” when his career is over. The gratification of hard contact. On that the England openside flanker has built a career.