TV View: Ireland end a bonkers week with another blank 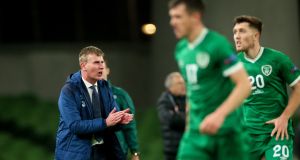 If Uefa had even half a heart they would have made our game against Bulgaria a five-aside contest because the way the week was going, it looked like that’s as many players as Stephen Kenny would be able to muster.

When Sky’s coverage kicked-off, it was like Genoa all over again, the nation holding its breath, crouching behind their couches with cushions pressed to their faces, as it waited for an update on the latest player(s) to be unavailable to Kenny.

In all, then, Kenny had lost 14 of his original 26 strong squad, making the whole thing kind of like Irish football’s version of I’m A Celebrity ..... Get Me Out Of Here.

During Sunday’s game against Wales, Phil Babb had suggested that the Irish ‘meeja’ was turning on Kenny due to that nine and a half hour goal drought and seven games without a win, but this isn’t actually true.

The Irish meeja has largely acknowledged that judging the Kenny reign thus far, in light of that absentee list, would be akin to judging Jimi Hendrix’s performance at Woodstock if he’d had his guitar swapped for a ukulele just before he went on stage. As analogies go, that one isn’t flawless, admittedly, but sure look, it’ll do.

Any way, with a number of our absentees ruled out for Covid-related reasons it was unfortunate that Matt Holland, who had replaced Babb in the Sky line-up, told Rob Hawthorne that “this is a chance for Ireland to get a positive result”, as if we haven’t had enough. But he wasn’t quite sure where a goal would come from.

“Is Robbie Keane fit,” he asked. He might not even have been jesting - indeed, there must have been a stage in the build-up when Kenny was tempted to give Robbie a call, along with, maybe, Jim Beglin, David Connolly, Rory Delap, Tony Galvin and such like, just to check on their fitness levels.

Team news. It’s probable that a large enough percentage of Ireland said “who?” on hearing a sprinkling of the names, but Matt opted to look on it as a triffic opportunity for the newcomers.

That’s how Kenny chose to look at the situation too when he spoke to Sky’s Guy Havord. “You must feel like you deserve a bit of luck,” asked Guy, “well, we were close enough to having to pick a few Luas drivers,” Kenny didn’t reply, but he’d have been tempted. “Look, we’re focussed on the players who are here,” he said, “not on the ones who aren’t.”

Match time. Bulgaria missing a heap of players too - is it wise to be playing international football in the times that are in it? - but Cicinho was in their line-up, thereby denying them their usual full house of players whose surnames end in ‘v’. Don’t mock, one day that piece of information will win you a pub quiz.

A half hour in and the only positive observation Matt could make was that “it’s quite a socially distanced game”, all 22 players choosing to give their direct opponents at least two metres of space, while Rob chose to point out that “we’re at the 10 hour mark now of Ireland not scoring a goal”, as if we needed reminding.

Come the break, Rob showed us the first-half highlights, which meant he and Matt had 14 and three quarter minutes to fill with idle chat before the game resumed.

Second-half. When James Collins came within millimetres of scoring and Robbie Brady hit the crossbar, you couldn’t but conclude that if Kenny won the Lotto, his dog would eat his ticket.

Four minutes to go. “A lot of Ireland’s recent goals have come late in games,” said Matt, heroically trying to lift our spirits. “I’ve always admired the fact that you’re a glass half full man,” said Rob, before updating us on how long it’s been since we scored a goal - roughly when Brian Boru was galavanting about the place.

“It wasn’t a classic,” said Matt, an utterance that will win him the coveted ‘Understatement of the Pandemic’ award. “A miserable end to a miserable year,” said Rob, “it can only get better.”

True. And it’ll only be when he’s armed with an electric guitar rather than a ukulele, so to speak, should any one judge Stephen Kenny. Until then, just write this phase off as thoroughly bonkers.