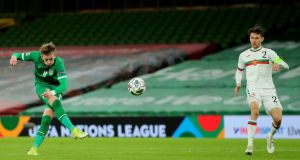 Not every improvisation forced on football had been a disaster and a few may be with us well after the pandemic has passed. We should all hope, though, that Ireland never again have to play a November home game in an empty Aviva stadium. On a wet and windy night, the stadium felt like a desolate place and when the trains passed under the West Stand during a game the conditions were doing very little to help, there was a touch of ‘The Howling’ about it all.

Stephen Kenny may remember the occasion with slightly mixed feelings. The manager ideally required a couple of goals and the win they would have brought to help him draw a line under what has been a difficult time.

He got none of that from an open and largely even contest between two terribly weakened sides, but the Nations League point secured for at least keeping a clean sheet ensures that the team avoids relegation to the competition’s third tier. It was not enough to save the second seeding for next month’s World Cup draw, something that might have made the manager’s life that bit easier next year.

After the disappointing nature of the past week, there were a few encouraging aspects again here with plenty of peripheral players getting game time and a couple doing quite well. Even after the manager had made quite a few changes late on, Ireland looked eager to avoid the game ending in stalemate and they probably departed in the belief that they had, on balance, been good enough in the second half to nick the win.

While the Bulgarian back four survived a couple of very close calls, their goalkeeper became the latest in recent times to come through a game against Ireland without really having to make a save.

Kenny’s well documented difficulties were there for all to see in Ireland’s starting line-up with Ryan Manning thrown in from the outset on his international debut despite his lack of recent first-team club football, while James Collins, Ronan Curtis and Jason Knight all got starts having come on in recent games.

They took to it at different rates with the younger players showing their inexperience early on, while Curtis looked much more at home and Collins well suited to the physical challenge presented by a Bulgarian defence that liked to get stuck in.

Manning sought to get forward from the outset but a couple of errors cost him the opportunity to make much more of an impact. Still, he and Knight will be grateful to have gotten away with their most worrying moment midway through the opening half when the left back underhit a pass for his team-mate, who then tried to get himself out of trouble by moving the ball along first time to Shane Duffy. Dimitar Iliev intervened, however, and though his shot was partially blocked down, Darren Randolph still had a save to make.

With Duffy having done something remarkably similar a few minutes earlier, only for Conor Hourihane to get him out of jail, the home side was coming across as careless in areas where it was dangerous for them to let their guard down.

Sure enough, the visitors created their share of chances and actually had the better of those that came in the first half. Ireland’s best by a distance up until the break came when Curtis cut in from the right and his deflected shot bounced just inside the far post, a yard too far forward for Collins to turn it home.

There should have been more. Robbie Brady played team-mates into space well on a couple of occasions only for the opportunities to be wasted and a couple of his set pieces had the Bulgarians in real difficulty. The closest anyone came to turning one of them home was 38 minutes in when Duffy, at full stretch, headed wide.

The hosts really needed to be doing more than that to put it up to their opponents and Kenny sought to add to the attacking threat midway through the second half when he replaced Daryl Horgan with Josh Cullen and freed Brady up to push much further forward.

Within a minute, the switch came with an inch or two of paying off when the Burnley midfielder drifted inside from the right and hit a left-footed shot from close to 30 yards that crashed off the cross as Martin Lukov looked on.

Ten minutes later, Brady was gone, limping away off down the sideline after having been on the receiving end of the a heavy challenge. It allowed Jack Byrne to make his mark from a slightly deeper position, almost teeing Collins up with a curling cross that Kristian Dimitrov did very well to cut out.

There were a couple of other opportunities, Randolph nearly gifting a goal to Bozhidar Kraev by miscontrolling under pressure and Collins turning a low cross into the side-netting but neither side, in all honesty, caused the other too much trouble.

Though he will hopefully be better equipped for the task, Kenny clearly has some problem solving to do before 2021 and the World Cup come around.

Subs: Vasilev for Cicinho, Kovachev for Delev, Karagaren for Ivanov (all 60 mins), Aleksandrov for Iliev (81 mins).