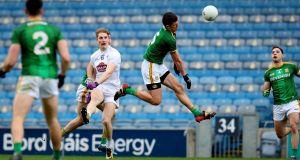 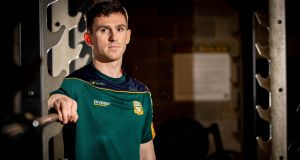 Despite being only 26, Shane McEntee is already a veteran by intercounty standards. The centre back is one of the elder statesmen of a youthful Meath side that has been turning heads in this year’s championship. To date, they’ve posted and amazing points to goals ratio of under 2:1, with 12-23 scored in their opening two games, with the newcomers making their presence known on the scoresheet.

“Some of the young lads have brought their shooting boots,” says McEntee. “I think the only goal I ever scored for Meath was in a minor game nine years ago, but Matthew Costello and Jordan Morris have scored about six between them so far in their first two games.”

Having overcome Kildare in a topsy-turvy game Meath face a short turnaround before they have the unenviable task of trying to halt Dublin’s seemingly relentless march through the Leinster championship.

“It was a strange game against Kildare. We were lucky to still be in it at half-time, but the second half was good from a football and character point of view because we were looking down the barrel of the gun and were able to claw it back, but we know we won’t get away with it next time.”

McEntee believes the quick turnaround from last Sunday’s win to Saturday’s Leinster final meeting at Croke Park with Dublin might not be a bad thing. Between a visit to the sea after the game to pitch sessions this week and a look at Dublin, he says it’s a “compact schedule. That can be good as well as it doesn’t leave much time to think about it”.

The defender is keen to atone for Meath’s hammering at the hands of Dublin in last year’s championship, although he believes that the scoreline doesn’t reflect what was a tightly fought battle for long periods.

“After the Dublin game last year we got a bit of a bashing, some of it was deserved but we acquitted ourselves well for a lot of the match. Our defence held up well and we were in touch with 20 minutes to go but we kicked 16 wides and eventually the floodgates opened and they won well.’’

Speaking of the recent league game between the counties, McEntee says: “Our last performance against Dublin was encouraging. We know there’s a big difference between league and championship and we will have to perform to the max of our ability to give ourselves a chance.”

The Leinster final takes place on the 100th anniversary of Bloody Sunday in Croke Park and the importance of the date in isn’t lost on McEntee who is currently serving as an officer in the Army while completing a degree in social science in UCD.

“It’s a significant moment from both a GAA and national heritage point of view. I was fortunate enough through my military experience so far to participate in the 1916 centenary commemorations and they were very special. Croke Park is a unique place to be playing on that weekend so we’re delighted to be able to play on that day.”

While McEntee acknowledges that playing a championship under Level 5 restrictions presents policymakers with a whole host of challenges, he feels more needs to be done to look after the players that make the whole thing possible. He shares the sentiments of Limerick’s John Kiely who has expressed his disappointment that the GAA was not allowing extended county panels attend games.

“We hear a lot of how playing the championship is boosting the mood of the nation etc . . . but more needs to be done to look after those involved. We’re only allowed 26 players in the stadium on match day. Some lads have been training for months and will have to watch from home and could miss out on what could possibly be the high point of their career. I don’t envy policymakers but allowing an extra 10 lads into an 80,000 seater stadium should be allowed,” he says.