Stander: ‘I’d like to show him what we can do and what we have done before’ 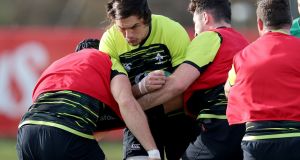 The “soft” remark made about Ireland by Springboks head coach Rassie Erasmus has the potential to reappear before every major Test match.

There are no better men to ask about such an insulting charge than Ireland’s South African-born forwards CJ Stander and Quinn Roux.

“I would like to, not really prove him wrong, but I’d like to show him what we can do and what we have done before,” said Stander when asked about his fellow countryman’s comment in the ‘Chasing the Sun’ documentary.

Erasmus, the former Munster director of rugby, was describing Wales as “tough f**kers” ahead of last year’s World Cup semi-final in comparison to his perceived flaws of Ireland and England.

“That is a big statement to make,” continued Stander, who captained South Africa under-20s in 2010. “[Erasmus] put it out there so, you know, that’s his prerogative. That’s what he thought of us. It is not going to be easy to change his view but, luckily, we are not playing against them this week. We will get them at some stage.”

Roux refused to be drawn on what Erasmus said.

“I don’t really pay much attention to it,” said the 30-year-old Connacht lock. “That sort of thing is not going to affect us is it?”

Before joining Leinster in 2012 and switching to Connacht in 2015, Roux was on course to become a Springbok after breaking into a Western Province pack coached by Matt Proudfoot.

The former Scotland prop was Erasmus’s forwards coach at last year’s World Cup but has since been recruited by England.

“Yeah, I spent a few years with Matt,” said Roux. “It was a long time ago. I was only a young lad, but obviously South African packs are all kind of set-piece dominant; they rely on that and you’ve seen the way South Africa play and obviously the way England play [with] a massive set-piece focus and trying to be dominant in that area. I’m sure that’s what’s going to happen on the weekend again.”

Roux keeps Iain Henderson on the bench for Twickenham on Saturday, with Ireland coach Andy Farrell refusing to elaborate on the “medical issue” that ruled the Ulster captain out of last week’s 32-9 victory over Wales.

“It is a private issue that I would leave to the medics and Iain,” said Farrell. “He is fit and able and raring to go.”

Despite Henderson’s availability, Farrell is rewarding Roux for a powerful scrummaging display behind Andrew Porter.

“As much I like to be dominant I need to be able to make sure that my tighthead [prop] is dominant and that’s my main job, making sure that he’s comfortable and making sure he doesn’t take a backwards step. That’s a big responsibility but it’s something that I really take pride in. It’s probably going to be the biggest challenge yet this weekend.”

Concerns over physicality will follow the Irish forwards around until they get the better of an English, French, New Zealand or South African pack.

“I will tell you this: you can only be physical if you know what you are doing,” Stander continued. “We have had a good week. We prepared well. We know what we are going to do.

“Scrum down, set piece, get them flowing, get off the line and bring the physicality we can bring. You can’t go out there and straight away look for physicality. It is international rugby. I am looking forward to the battle. We will see after Saturday and we can talk about that again.”

The sound of England players celebrating the smallest decisions in recent meetings must be ringing in the ears of Irish players, particularly Stander who had his jersey pulled over his head by Maro Itoje during the 24-12 defeat at Twickenham last February.

“England try to get into the game that way. It is up to each individual, what you bring to the game and how you deal with that situation.

“Look it, if there is a scuffle and I am in the middle of it, I know I am backed by the team and so is everyone else.”