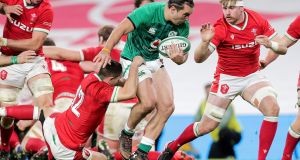 During a wide-ranging interview earlier in the week Mako Vunipola referenced James Lowe describing him as “one of the best wingers in Europe for the past two or three years”.

Grabbing the attention of the England and Lions loosehead prop suggests that Lowe has featured prominently in the video analysis ahead of Ireland’s Autumn Nations Cup game at Twickenham on Saturday (3pm). Vunipola, along with several team-mates, would have come to appreciate Lowe’s qualities in Champions Cup encounters.

In making his Ireland debut against Wales the primary concern for the 28-year-old wing was to replicate the on-pitch influence he has brought to bear in his time with Leinster, something he accomplished impressively. Lowe’s energy, enthusiasm and work rate are the perfect accompaniments to his talent.

He’s proactive when it comes to getting his hands on the ball and as the graphic illustrates he contributes handsomely; 25 involvements in a match is a decent strike rate for a wing. The official statistics saw him carry 11 times, run for 70 metres, beat three defenders, make the same number of tackles and score a try.

Delving beneath those numbers though puts flesh on the skeleton of his performance against Wales. Within a minute of the opening whistle he’d popped up twice, collaring Wales fullback Leigh Halfpenny in chasing a box-kick and then fielding a similar kick and powering through three tackles.

He might have had an early try but wasn’t expecting Johnny Sexton’s cut-out pass – it should have gone through other hands – and the ball spilled as he tried to take it one-handed. The ensuing push-and-shove with Welsh wing Liam Williams offers a glimpse of a character that is happy to get into it, physically and verbally with the opposition.

His fifth and sixth involvement documented in the graphic underline his work ethic, first receiver from a ruck following a lineout in which he committed multiple tacklers and got over the gain line and then, along with Peter O’Mahony aggressively cleared out a ruck five metres from the Welsh line. Soon after he once again stepped up to receive a pass from Jamison Gibson-Park, broke Williams’s tackle and raced into Wales 22 before offloading to Sexton.

That vision and inclination not to “die with the ball” will be an important component in Ireland’s attacking patterns. There is a moment later in the half when Lowe passes immediately to O’Mahony on the right touchline and then looks to support the flanker. The Munster captain slipped as he tried to duck under a tackle but his team-mate’s decision was a good one.

Lowe offers a prodigious left-footed kicking option of which there were two excellent examples, the first (number nine in the graphic) when he cleared from deep inside the Irish 22 to virtually the halfway line and then in the second half (23), he thumps the ball 60m into the Welsh 22.

His strength in and through the tackle is very effective on both sides of the ball and there were a number of examples in defence of him being able to withstand the initial collision to get the ball away to a team-mate. A highlight in terms of his defence was a good read in coming in off a wing to make a man-and-ball tackle on George North (20) thereby shutting down an attack, when Wales had numbers out wide.

But it is in attack that Ireland coach Andy Farrell will hope that Lowe figures most prominently at Twickenham. The manner in which he scored his try against Wales showcased his potency from close range. When Caelan Doris broke off the back of the scrum and fed his wing, there was still plenty left for Lowe to do but it is his footwork as well as his power that makes him very difficult to defend.

He rarely loses or is stopped in the first collision and largely appreciates who and what is on around him. England will be a much stiffer assignment because Ireland won’t get as much front-foot, quick possession and will face a defence that brings a much more aggressive line speed. Lowe has faced challenges of that ilk in the past and as other teams have discovered he is rarely a peripheral figure in any contest.

Georgia captain Sharikadze still rates Ireland among the world’s best 14:38
All Blacks go back to basics to beat Pumas and snap losing streak 14:00
Big four ready to rumble on hurling’s special weekend 09:30
Jim McGuinness: There is a way to save championship and make it competitive again 09:00
Has Mike Tyson completed the least likely redemption story in American sport? 09:00
Crossword Get access to over 6,000 interactive crosswords