Gaels force too much for Castlerahan in Cavan 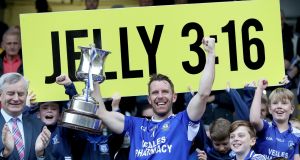 Cavan Gaels captured their first county SFC title since 2014 with the minimum of fuss at Kingspan Breffni.

Veteran Seanie Johnston collected his tenth county medal and the man of the match award in what was a real tour de force.

Castlerahan were their own worst enemies, though, as they set about trying to claim first ever title.

They let the Gaels off the hook when Paul Smith blasted his shot over instead of under the black spot on 16 minutes and then Cian Mackey’s effort from the penalty spot - after Daniel Lynch was brought down - flashed wide of the junction of crossbar and upright in the 23rd minute.

Thereafter, Johnston’s points proved pivotal in steering his side into a 0-7 to 0-2 interval lead but points after the break from Oisin O’Connell, Oisín Kiernan and Mackey kept Castlerahan in touch.

Castlerahan kept nipping away at their opponents’ heels but to no avail and the dismissals of influential duo Cormac Daly and Stephen Cooney only served to rub salt into their wounds.