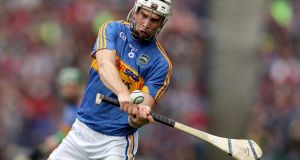 TIPPERARY SHC FINAL
Borris-Ileigh v Thurles Sarsfields, Semple Stadium, 3.30 (TG4)
Thurles are the Tipp championship’s pool hustler, holding the table all night, swatting away all-comers. This will be their eighth county final in 10 years and their seventh different opposition. They haven’t lost a final since 2008.

Borris-Ileigh are in their first final in 29 years. Borris have leaders throughout the field in Brendan Maher, Dan McCormack and Paddy Stapleton but experienced Thurles would appear to have more.

LEITRIM SFC FINAL
Glencar-Manorhamilton v Mohill, Páirc Seán MacDiarmada, 3.30pm
Glencar-Manorhamilton have ground their way to this final after looking in big trouble in the wake of an shock defeat to unfancied Bornacoola back in August. They’ve lost in the final for the past two years, one of them after a replay. Not much between these sides but Manor get the nod.

CARLOW SFC FINAL
Éire Óg v Rathvilly, Netwatch Cullen Park, 3.45
Palatine were going for three-in-a-row in Carlow before Éire Óg upset them with a five-point win in the semi-final. Rathvilly were inspired by Brendan Murphy in their semi-final win over Old Leighin and he can keep their flag flying here.

CAVAN SFC FINAL
Castlerahan v Cavan Gaels, Kingspan Breffni Park, 3.30
Two years ago, Castlerahan lost the final by a point; last year, they were pipped after a replay. They’re 3-1 outsiders, having never won a Cavan title. Maybe this could be their time.

LONGFORD SFC FINAL
Abbeylara v Mullinalaghta, Glennon Bros Pearse Park, 4.0
A repeat of last year’s final. Mullinalaghta probably have the more rounded side, with Abbeylara so heavily reliant on the brilliant Robbie Smyth. Could be the difference.

Blackrock v Na Piarsaigh, Páirc Uí Chaoimh, 2.15
Imokilly v Sarsfields, Páirc Uí Chaoimh 4.0
There will be talk of old glories being revived when the final comes around. Blackrock, Na Piarsaigh and Imokilly won six out of eight titles around the turn of the century but none of them have seen a final since 2004. Sarsfields look the most battle-hardened side, having overcome a star-studded UCC team after a replay.

But Derry led by nine points at Croke Park and Fermanagh needed a last-gasp penalty goal from Sharon Murphy to salvage a replay.

Derry have named an unchanged starting 15 but Fermanagh have made two changes for the replay.

Joanne Doonan comes in at corner back for Edel Campbell, with Bláithín Bogue, who scored a point off the bench in the drawn match, at corner forward in place of Nuala McManus.