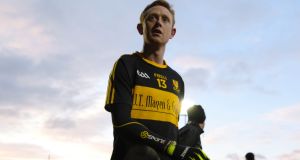 All-Ireland Club champions Dr Crokes, inspired by the genius of Colm Cooper, cruised into yet another Kerry club football final with an emphatic 5-13 to 0-14 win over West Kerry side on Saturday.

Crokes were always in control at Fitzgerald Stadium with their free-scoring forwards causing a youthful West Kerry defence problems throughout.

West Kerry’s cause was not helped when they lost livewire forward Tomas Ó Sé through injury and then, just before half-time, Jason Hickson collected an unnecessary second yellow card. Playing with 14 men for the entire second half West Kerry never had a chance.

A goal from team captain Daithi Casey in the ninth minute after work for Tony Brosnan and Gavin O’Shea gave Crokes a 1-2 to 0-1 advantage. Eanna Ó Conchúir had spurned a great goal chance for West Kerry two minutes earlier.

Casey cannoned a ball of the crossbar in the 20th minute but Brian Looney and the impressive Micheál Burns ensured Crokes led 1-9 to 0-5 at the interval.

Cooper displayed another touch of his sorcery three minutes after the restart when he spotted the West Kerry defenders arguing protesting with the referee after a free was awarded. Without hesitating, Cooper rifled the ball into the top corner past Tomas Mac an tSaoir.

Things got worse for West Kerry when Crokes ran their young bench as substitute Jordan Kiely netted two goals before Paul Clarke added another for a 14-point win.

They will face South Kerry in the final on October 22nd with Bryan Sheehan inspiring his side to a narrow 0-12 to 1-8 win over Kerins O’Rahilly’s. This was a slow burner, despite an early goal from a Jack Savage penalty, earned by Tommy Walsh who later had to limp from the fray.

Sheehan kicked three points from play while Daniel Daly added three more, but the tie remained in the balance until sub Ian Galvin gave them the lead from a free and Kerry fullback Mark Griffin added another in injury time.

Barry John Keane got one back for Kerins but then missed a long range free to force as replay as South Kerry once again held their nerve when it mattered most.