Fermanagh make no mistake at second time of asking 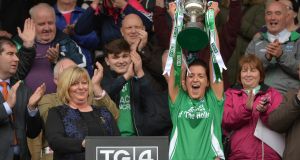 Fermanagh claimed the TG4 All-Ireland ladies junior football crown at the second time of asking as they overcame Derry in a pulsating final replay in Clones on Sunday afternoon.

During the initial meeting of the sides at Croke Park last month, Emmet Curry’s Ernesiders had been nine points behind before rallying late to earn a second chance.

And they were clearly determined not to find themselves in such a position again as they started with a flurry of scores here and were soon three points to the good, with Eimear Smyth providing the pick of those early efforts courtesy of the outside of her boot.

At that stage, the Derry management rightly looked concerned, particularly when they could only strike the frame of the goal after Megan Devine had weaved her way through the defence and unleashed a low effort.

Slowly though, they began to find their feet and edged their way back in to the contest through scores from Emma Doherty and Ciara Moore.

But their increasing hopes of a comeback at St Tiernach’s Park were dented hugely when a rapid Fermanagh counter-attack was rounded off by Bláithín Bogue finding the net with a superb finish from a tight angle.

And, mainly thanks to that score, at the break it was the girls in green in charge with a narrow 1-4 to 0-5 advantage.

Derry, with the words of manager Paul Hasson clearly still ringing in their ears, began the second half in much brighter form and rapid-fire scores from Ciara McGurk and two Emma Doherty points quickly moved them on to level terms.

It was at this stage though that Fermanagh, roared on by a large support amongst the 5,000-plus crowd, seemed to grow stronger in the face of adversity.

Full forward Sharon Murphy, who salvaged a replay with a last-gasp penalty goal in the drawn game, rattled the crossbar with a powerful drive and Derry could only partially clear the danger.

Following that, Fermanagh corner back Joanne Doonan’s long punt towards goal dropped in to the back of the Derry net to make it 2-5 to 0-8 – a decisive score.

In the closing stages Derry found themselves in some great positions without being able to convert the chances their intricate build-up play deserved, while Fermanagh could do exactly that to narrowly get over the line and secure the West County Hotel Cup.

After losing intermediate finals in 2009 and 2014, Fermanagh finally landed a first All-Ireland title in the adult grade, but Derry’s long wait continues.

Fermanagh will also return to the intermediate championship grade next year, another reward for this gritty replay win.