Dunloy start strong but pegged back by defending champions 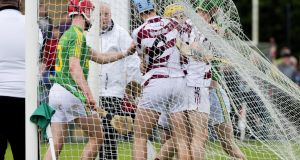 Players from both teams scuffle at Owenbeg. Photograph: Evan Logan/Inpho

Slaughtneil survived an early scare to defeat Dunloy by seven points at Owenbeg. The Antrim champions hit the holders with an early blitz and led 1-4 to a single point after 13 minutes.

But, stung into action, the Derry men recovered impressively and ran out comfortable winners in the end. Cormac O’Doherty top scored for the winners with eleven points including four from play, in a man of the match performance for Mickey McShane’s men.

A Nigel Elliott goal in the eighth minute backboned a terrific start for the away side as Dunloy threw down an early gauntlet to the reigning champions. Trailing by six points early on, Slaughtneil responded magnificently to hit the next nine scores including Chrissy McKaigue’s somewhat fortuitous 26th minute goal. Cormac O’Doherty’s tremendous catch and ensuing point in the 20th minute signalled that his side had finally found their groove and when they gobbled up the Dunloy lead they never looked like going behind.

The Emmet’s led 1-9 to 1-5 at the break and extended that advantage soon after through scores form Brendan Rogers, Brian Cassidy and the ubiquitous Cormac O’Doherty.

The Antrim men, feisty to the end, scored a second goal late on through Paul Shiels, but with O’Doherty in sparkling form Slaughtneil cruised to victory and another provincial final.