Meanwhile, Cork’s Brian Turnbull was selected as the minor hurler of the year 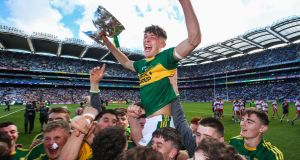 After helping Kerry to an All-Ireland minor football championship title, David Clifford has been named as the Minor Footballer of the Year, while Cork’s Brian Turnbull won the hurlers award.

Clifford was a key figure yet again as Kerry secured their fourth minor title in four years. The Fossa clubman scored 1-10 in the semi-final win over Cavan and 4-4 as Kerry defeated Derry in the final at Croke Park in September.

The 18-year-old has now scored 10-68 in his 12 minor championship matches over the past two seasons and is widely expected to be a mainstay in the senior county team for years to come.

Meanwhile, Turnbull amassed a total of 1-51 over the course of the minor hurling championship this year, notching 1-7 in his side’s All-Ireland final loss to Galway at Croke Park.

Kerry legend Jack O’Connor was also honoured on Saturday with the Minor Star Special Merit Award, presented to him by Mícheál Ó’Muircheartaigh, for his significant contribution to minor football in Kerry.

Minor hurling team of the year

Minor football team of the year