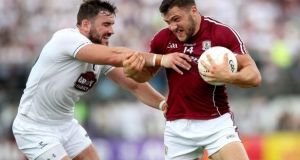 It has slipped under the radar that this match constitutes a record fourth successive meeting of the counties in a Connacht final, an outcome not widely canvassed at the start of the year but as Damien Comer put it about Roscommon’s defeat of Mayo, how surprised should you be when a county that has been a regular presence in Division One beats another?

Comer is one of a number of players missing because – as in his case – of injury and sundry others causes of unavailability. The named teams show dramatic changes from last year’s provincial final with just six starting players on either side the same.

It is a reasonable complaint on the part of the challengers to point out that whereas Galway’s injury problems have got a lot of media space, the impact of unavailability on Roscommon is just as severe.

For instance, in the centrefield area where Roscommon have tended to struggle Cathal Compton was immense for 30 minutes of last year’s final and it was only on his forced departure that Tom Flynn took a decisive grip on the area. For all that Comer is a significant loss, his marker 12 months ago Niall McInerney, one of the challengers’ more capable defenders, is also not around this time.

To date Galway have been a bit sluggish – albeit that they weren’t going to be stretched by either London or Sligo – whereas Roscommon sprang a famous ambush on Mayo, fresh from their league win in March.

Kevin Walsh’s side have carried injuries throughout the league and they bite most obviously in the full-forward line, which in Comer’s absence is fairly bantamweight if also skilful, and the half backs where Corofin’s Club Footballer of the Year Kieran Molloy and returned AFL prodigal Cillian McDaid both miss out with injury.

He will be hoping that the once-upon-a-time peerless under-21 centrefield pairing of Flynn and Fiontán Ó Curraoin can step it up at this level.

Injury again rules out Roscommon’s accursed Ultan Harney, who has yet to start any of the five Connacht senior finals (including a replay) in recent years, and his powerful presence will be missed.

Anthony Cunningham got great energy off his bench against Mayo but injuries mean that that won’t be replicated even if the starting 15 may be slightly stronger as a result. They won’t be intimidated by playing Galway in the venue where they beat them to win the 2017 Connacht title but the champions are forewarned both by that and Mayo’s more recent miscalculation.