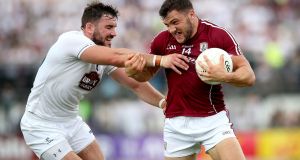 It will come as no surprise to anyone familiar with his style of play that Damien Comer is an impatient invalid. Comer, whose wrecking-ball role gave a defensive Galway team disproportionate threat, hasn’t found it easy to accustom himself to the slow, solitary protocols of rehabilitation.

A freak injury – an ankle fracture playing a soccer match for charity – at Christmas ruled out Comer for the entire league and in all likelihood the Connacht championship, as he isn’t expected to play a role in Sunday’s final against Roscommon even though there is a school of thought that he’s be worth a bench spot just to spook the opposition and fire up his team-mates.

Nearly six months on and back running “in straight lines”, according to manager Kevin Walsh, the frustration of getting himself right for the upcoming Super 8s or final round All-Ireland qualifier has been a constant.

“It’s mentally challenging more than anything when you’re stuck inside and everyone is outside,” says Comer. “Often you’d be giving out about training – and it’s tough, training – but it’s still much better being out there doing it than trying to match it and not getting close.”

In as much as misery loves company, he is well supplied. Galway have had a lengthy injury list including team-mate Paul Conroy, who sustained fractures in both legs during last year’s historic win over Kerry and who is also a teaching colleague of Comer’s in Claregalway’s Coláiste Bhaile Chláir.

“We’d be in a lot of contact together. I would have been looking at him – he went through a few bad days as well where he went back training and it just wasn’t happening.

“He felt outpaced, couldn’t get back to the speed he was at. Now obviously he’s coming back from a very serious injury. Then he just turned a corner one week and all of a sudden that pain kind of went. He felt that his speed is back up to near normal and he’s back without a limp as well. It’s great to see that, it nearly drives you on as well.”

In the absence of so many players, Galway’s league campaign was encouraging in that it followed up on last year’s and they nearly made the final for a second successive year. But having established a first-half lead in Omagh, they fell away in the second half against Tyrone.

Comer had plenty of opportunity to observe the league and believes the misfortune with injuries helped Galway to deepen the strength of the panel.

“I was very impressed with it. I said it to Kevin as well at the time, the whole thing of the injuries was nearly a blessing in one way because you’re not going to get that far generally if you don’t have strength in depth within the squad.

“I think the injuries kind of forced our hand in that we had to throw lads in who were debutants, who hadn’t played at that level, and they reacted really, really well.”

The sight of Roscommon in the Connacht final was unexpected even allowing that the match with Galway is the third time running the counties have faced each other in the provincial decider. It was just that this year, with new league winners Mayo on the same side of the draw as Roscommon, who hadn’t beaten them for 18 years, the consensus was that there would be a different pairing.

Comer is quick to defend Roscommon from the brunt of low expectations.

“Roscommon are a Division One outfit; they’ve been there or thereabouts and we’ve had some ding-dong battles with them down through the years. There’s nothing between us and them, and even Mayo as well. It probably shows the competitive edge that’s within Connacht at the moment.

“Roscommon are a good side and they’ve really brought a physical edge to their side this year. Conor Cox coming in obviously is a talented player, he’s added a lot to them and that’s all adding to their panel, which is important. So I couldn’t say it’s been a surprise.”

As the most advanced posting in Galway’s attack, Comer also gets asked about the county’s extreme tactical caution under manager Kevin Walsh. It’s a bit of a fixture now with all the county’s players, who get quizzed about what it is like to play in such a system.

The subtext tends to be that, in contrast, feted county champions Corofin play an exuberant, forward-oriented style of football.

“You’d see different tactics from different managers, every team is set up differently but I think it’s evident in everything. One of the lads who was at Dublin-Louth [in the Leinster quarter-final] sent me a picture when they were down to 14 men and there were 14 of them behind the ball.

“The Louth goalie was out nearly between the 45 and the 21 and it was just funny because everyone would label us a defensive team, and Fermanagh and a few others but it’s nearly every team at this stage.

“You’ll see it throughout the championship. It’s the way the game has gone. You’ll defend in numbers, you attack in numbers but it’s part and parcel of it.”