Cork and Tipperary look on course for a Munster final clash 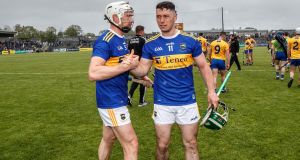 A year must seem like a long time for Clare. In last year’s championship they had two provincial scraps with Cork, as both counties were en route to the All-Ireland semi-finals; this weekend they look down and out despite having a home fixture against their rivals, on which potential progress in the championship depends.

It’s hard to know what precisely went wrong for the team apart from a simple decline in form, especially in attack where last year’s All Stars Peter Duggan and John Colon have struggled to hit the heights with any degree of consistency whereas Tony Kelly has been effectively shut down in the big matches.

Yet it’s only a couple of weeks since the arrival of Tipperary in what was flagged as ‘Fortress Cusack’ (then the only 100 per cent venue in Munster under the current format) promised a summit meeting between two top sides but Tipp drove a tank through Ennis and Clare’s morale seemed to implode.

Getting walloped again by Limerick a week later completed the demolition and now, although there is an outside chance of making the cut in Munster, few rate Clare’s chances of beating the defending Munster champions as anything other than remote.

It’s not an ideal fixture in the sense that the championship record between the counties since the famous 2013 All-Ireland final replay stands at 5-0 to Cork. Last year, buoyed by having dismantled eventual All-Ireland winners Limerick in what was still a fortress, Clare went on to take on Cork in the provincial final and fell apart in the second half.

This year, with no such confidence to draw upon, they await their fate.

Cork have been up and down but even allowing for the courtesy of Waterford’s challenge, they took their scores fluently last week and look bound to have more in the locker than their demoralised opponents.

Despite the potential to be a classic, this fixture may turn out to be undermined by the round-robin system just as to an extent, last year’s Leinster dead rubber between Galway and Dublin proved when the former, like Tipp this weekend, were already assured of a provincial final spot.

Then there is the difference in likely attitudes, influenced by last year. Tipperary endured a miserable 2018 and clearly want to amend that record so they have hit this year’s ground, sprinting. The revival under the once and future management of Liam Sheedy has featured redefined roles for someone like Noel McGrath and above all, hugely improved playing discipline.

For instance John O’Dwyer didn’t shoot the lights out against Clare when bulbs were shattering all over the place but he was controlled in his use of the ball – a simple pass rather than an indulgently speculative thrash – and focused.

Limerick have different memories of last year but have in common a provincial campaign that ended on a down note. Taking the lessons on board, John Kiely’s team simply reset and launched the blistering late summer offensive that bridged probably the most famous roll of honour gap in hurling.

Already beaten this season, Limerick have recaptured excellent form and regardless of how they actually line out, will give 100 per cent so in that sense there’ll be no throwing of the match but equally, there’ll be no panicking if it doesn’t turn out successfully, as their scoring difference means that they would have to lose by 30 while Clare surprise Cork by marginally more if they are to be shifted out of a qualifying spot.

Limerick’s power and purpose over the past two weeks make them formidable even with some player rotation but they are playing a long game whereas Tipp, in their current exuberant mood, are playing every game.