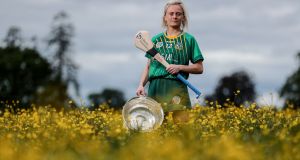 Meath’s Megan Thynne at the championship launch: “Since the Leinster championship a couple of weeks ago we have really tried hard in the last few weeks. We just want to compete.” Photograph: Dan Sheridan/Inpho

Megan Thynne hopes Meath will be more competitive in this year’s Liberty Insurance All-Ireland Senior Camogie Championship than they were in their debut campaign.

After an historic replay victory in the 2017 All-Ireland Intermediate Final, the Royals found the step up a chastening experience and suffered a number of heavy defeats.

Thynne, who also plays senior football for Meath, places value on the learning experience and is looking forward to tomorrow’s Group Two clash with Dublin at Parnells GAA ground in Coolock.

“There is a big difference between the senior and intermediate grade,” Thynne notes. “After winning the intermediate we just stayed at the level we were at. We never rose at all. You need to when it comes to that.

“Reflecting on last year brought not a good start to this year. Playing in Division Two of the league, we were probably expected to do a bit better than we did. We were a bit flat. We didn’t perform. And we knew that ourselves.

“But since the Leinster championship a couple of weeks ago we have really tried hard in the last few weeks. We just want to compete. We know realistically we are not going to win the championship. But we want to make other teams work hard to win the games against us. If we compete and perform we will be happy.”

Part of the early-season stutter might have been down to the shock of being without the godfather of Meath camogie, John Davis, who ended his 11-year reign as manager at the age of 70.

Davis had brought Meath from Division Four to Division One in the National League and steered them to All-Ireland glory at Junior A, Premier Junior and Intermediate levels. The players knew no-one else and in the circumstances, it was always going to be difficult for Ray Gavin – a Westmeath man like Davis – to make an immediate impact.

“John was there for so long. The transition into a different mindset and different sort of training and stuff like that has probably taken people a bit longer than we expected to get used to. But hopefully if everyone sticks together and pushes on we’ll get there.”

An all-action operator who has been a driving force in her club Kilmessan’s All-Ireland triumphs in the last two years, Thynne has no truck with anyone suggesting Meath might be better off stepping back down to intermediate.

“I would rather be up getting to play all the top teams. Getting to play against top players is where you want to be. It is not easy to get back up either. The intermediate was tough. We won it and you wouldn’t look back, you want to keep going forward.

“Definitely you want to stay up senior. I don’t think going back down and winning another intermediate would be ideal.”