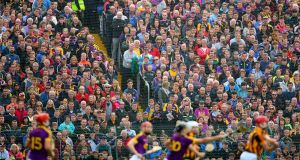 Wexford versus Kilkenny in 2017 – Wexford Park is without doubt the most hostile environment I have ever played in. The Wexford fans have the ability to create a real noise level, an eerie vibe to the place. Photograph: James Crombie/Inpho

There’s a bit of a World War II feel about the hurling championship, with battle being waged on two fronts – Eastern (Leinster) and Southern (Munster). If that’s the case, then we’re heading into D-Day this weekend, for the battles that will decide the direction the rest of the summer takes. Every game is important, none more so than when Kilkenny go to Wexford.

Wexford Park is without doubt the most hostile environment I have ever played in. The Wexford fans have the ability to create a real noise level, an eerie vibe to the place. There’s a tribal war feel to the stadium that makes you feel uneasy as soon as you set foot in the place.

It’s like they’re saying, ‘Hey, this is our house and we will protect it with everything we have’. Anytime I went there, I always felt like a young lad robbing an orchard, looking over your shoulder waiting for a farmer to chase you out the gate with a pocketful of apples. You never felt comfortable, you were always on edge.

I never liked going there. Normally, the only nice thing from days going to Wexford Park was the steak in the Ferrycarrig Hotel after the game. Beautiful county, great spot to visit, lovely people. But a brutal place to go and hurl.

We played down there in an under-21 Leinster final in 2001 and they beat us that day, 0-10 to 1-5. They sensed it from early on that there was blood to be got here – it was potentially a big scalp for them and like good assassins they took it. When the game finished, they ran through us like we didn’t exist – this is the supporters I’m talking about! They flooded the field after the final whistle and claimed it.

They had been down for a few years and had taken a few beatings from Kilkenny. This was payback. You could see the sense of relief in them as they let all that built-up hurt out and let a few of us know about it along the way. I admired that from them. It was not a pleasant place to go.

Which is exactly how it should be. Wexford supporters are one of the most passionate set of hurling fans I’ve witnessed. They make their voices heard and it takes very little for them to get excited. All you have to do is look at the Leinster final crowds over the past few years – 29,000 in 2016, then 60,000 in 2017 and back to 40,000 last year. No prizes for guessing which year Wexford were there.

It’s easy to love your county when it’s doing well. But plenty of Wexford supporters kept going even when things were bad. And they were never worse than in this fixture, which was one-sided for so long. Kilkenny and Wexford were in different places in every respect – teams, players, managers, underage systems. All of it told on the pitch and Kilkenny were able to hammer it home regularly.

But it has levelled out now. Wexford dominated at Leinster under-21 level in the early and middle part of this decade and these players have filtered through to the senior ranks. They’ve clawed Kilkenny back to the pack and have made this a really tight rivalry. The O’Connors, Liam Ryan, Conor McDonald and Lee Chin now make up such a strong backbone. They’ve grown up beating Kilkenny and there is no emotional hang-up in the fixture for them.

More than that, they love it when Kilkenny come to town. The atmosphere down there on Saturday night will be buzzing because they know they have every chance of a win. Their mouths will be watering and it won’t be for the local strawberries – it will be the thoughts of getting their teeth into Kilkenny.

And there’s plenty for them to get their teeth into. I wrote here last week of the concerns about Kilkenny’s overreliance on TJ Reid and that holds even more weight after the Galway game. TJ has taken his game to a level that’s not even on planet Earth anymore. It’s only where the elite can survive.

When players of the calibre of Padraic Mannion and Gearóid McInerney can’t hinder TJs influence, then you know you’re operating at a different stratosphere. It reminded me of Henry Shefflin in the drawn 2012 All-Ireland final against Galway when he was in a place where nothing could curtail him. He was everywhere the action was and his influence over the game was unstoppable.

Leave aside his scoring figures, which are unprecedented obviously. Think about this on top of them – TJ caught nine clean possessions on Sunday. Nine! In a single game. You will see a lot of interesting stats and figures over this summer but I’m saying here and now that nine catches in a game will not be beaten or even threatened. I don’t think I caught nine balls in 14 years playing for Kilkenny.

There have been subtle changes to Wexford since they turned Kilkenny over down there in 2017. Shaun Murphy isn’t the sweeper any more – Kevin Foley is now the nominated spare man and he offers more forward-thinking ideas and options. They still do a lot of their attacking from deep rather than keeping men forward and getting the ball into them. But when they push forward at the correct times, picking scores and creating overlaps, they are dangerous.

Structurally, they like to push up man-on-man for puck outs, particularly when they play with the breeze at their back and are putting the squeeze on teams. Rory O’Connor has offered a real goal threat to an attack that, for all its honesty and work-rate, lacked that X factor. Liam Óg McGovern offers a different dynamic since he came back from his injury and he’s a quality finisher with real pace.

So how do they set about Kilkenny? Just like it was for Galway, TJ has to be the starting point for Davy Fitz and Wexford here. The big complicating factor is the availability of Walter Walsh. It’s no accident that TJ caught nine balls when Walter was sitting in the stand. On another day, with the pair of them there, Darren Brennan would have been aiming at least half his puck-outs at Wally.

When Kilkenny are in a corner and backs are to the wall, they go back to what they know best. Dogs of war hurling, fight for every inch

So if Brian Cody can get him on the pitch, he will. Wally’s physicality in the middle third as he drops into midfield is so important for Kilkenny. He fills pockets of space in front of the Kilkenny half-back line and offers them a security blanket. That’s before he does any attacking, which they need from him even more.

The reason he complicates things for Wexford is that anytime the teams meet, Matthew O’Hanlon picks him up. They are well matched physically and know each other well from their school days together. They more or less cancel each other out, getting into a wrestling match and hammering into each other like giants, taking blows that would level anyone else on the field and still coming back for more.

What’s important with this is that O’Hanlon generally picks up the opposition’s key forward, the bread winner who will win puck-outs, fight for scraps, get on breaking ball and give the team oxygen to breathe. The likes of Joe Canning of Galway, John Conlon, Séamus Harnedy are always on the menu for O’Hanlon.

But if Wally and TJ are both playing, it gives Davy a conundrum. What’s the best match-up? TJ is the main man but if O’Hanlon goes on him, what do they do with Wally? The only other Wexford defender with the height and physicality for the job is Liam Ryan but I can’t see Davy moving him out from the edge of the square. So Wexford are left with the same big question Galway faced last week – who has the defensive instincts, the pace and grit to try and stop TJ Reid?

This is so nicely poised to be a belter – maybe not necessarily in quality but definitely in tension, atmosphere and drama. When Kilkenny are in a corner and backs are to the wall, they go back to what they know best. Dogs of war hurling, fight for every inch. There’ll be nothing mysterious getting off the Kilkenny bus in Wexford Park.

Wexford will match them but I just about see Kilkenny finding a way through. It’s D-Day for both and Wexford Park is Normandy. Let battle commence.