GAA Statistics: Band of brothers - how the GAA's keeping it in the family

Up to 53 brothers could be involved in this weekend’s five games;13 in Connacht final 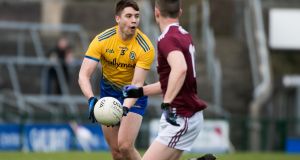 Five Dalys will start Sunday’s Connacht final, from two different families and five sets of brothers across the two teams. They are among 165 brothers on intercounty squads in the 2019 football and hurling championships.

Niall, Conor and Ronan Daly will make up half of the Roscommon back line for the clash with Galway, as they have done in every competitive match for Roscommon this year, other than the league draw with Tyrone. The oldest of the trio, Niall, was injured for that one.

The three defenders from the Pádraig Pearses club in south Roscommon live right on the border with Ballinasloe and their first cousin Eddie Hoare is a former Galway player. Younger brother Lorcan was a member of last year’s county Under-20 team under Shane Curran. So it runs in the veins and Roscommon are fortunate they're in primrose and blue and not maroon jersies.

Former Galway great Val Daly’s two sons John and Michael are also both likely to start again for the Tribesmen in the final, as they did against London and Sligo.

Val is a double All Star, and also a former Roscommon manager. His two young lads have been prominent for their club Mountbellew-Moylough, who have reached the last two senior finals in Galway and brought Corofin to a replay in the most recent decider. So a chip of the old block it would seem, both have big futures ahead of them.

Overall there are 13 brothers between the Roscommon and Galway panels. Roscommon also have captain Enda Smith and his talented older brother Donal involved. While Cathal Cregg and his fit-again brother Finbar are the third set of siblings in Roscommon’s squad. Corofin duo Martin and Michael Farragher, and Antaine and Finian Ó Laoi are the remaining Galway brothers.

Both counties have a strong tradition of fielding teams with brothers involved. Galway’s last All-Ireland triumph in 2001 included Richard and team captain Gary Fahy in the full back line – while Tommy and Pádraic Joyce were in the full-forward line.

Remarkably, in every one of Roscommon’s 21 Connacht final wins, a set of brothers has featured on the day.

Then in 1953 there were the Bradys from Elphin, a year earlier there was Brendan and Batt Lynch. Jimmy Murray captained Roscommon to the All-Ireland in 1943 and 1944, and he was joined on those Connacht-winning teams by his brother Phelim as well as in 1946 and 1947. In 1905 there were the Hessions, in 1912 there were the Brennans and and in 1914 there were the Maddens.

Other famous Roscommon brothers include Dermot and Paul Earley, and Tommy and Francie Grehan – the county’s last All Star in 2001.

After hearing this, superstitious Roscommon managers will forever more be loading their teams with even more siblings, but the losing Rossies have certainly been littered with brothers too. In the 2015 season Roscommon had five sets of brothers in their championship squad.

In total this year there’s been 79 sets of brothers – between the football and hurling senior championships – on intercounty squads.

The only panels which contain no siblings whatsoever are the Donegal, Limerick, Westmeath, New York and Offaly footballers. Lest we forget that in the 1982 All-Ireland final, when the last footballing five in a row bid was underway – Offaly included five sets of brothers on their team. Their current talisman, Niall McNamee is a cousin of fellow inside forward Ruairí, but that’s as close as it now gets.

Every one of the 10 counties in the Munster and Leinster hurling championships though do have a set of brothers involved.

Galway are the county with the most brothers in hurling; they have Pádraic and Cathal Mannion pulling strings at either end of the field, while Conor and Shane Cooney are joined by two sets of Burkes. Éanna, David and Darragh were part of the St Thomas team that lost the club All-Ireland final earlier this year, while Turloughmore are well represented by Daithí and Ronan – both of whom play their football with Corofin.

Dublin have the least amount, Seán and David Treacy from Cuala are the only pair. However, Bill O’Carroll is involved and his older brother Rory is back with the county’s footballers this summer. Defender Cian O’Callaghan also has a brother with the footballers, Con, who is the Cuala hurlers’ go-to man also. Tomás Connolly is a brother of former footballer Diarmuid.

The Dublin footballers have only the two brothers within their ranks too, Ballymun duo John and Paddy Small. Their Leinster final opponents, Meath, have two sets of twins in their squad, Thomas and Darragh McGovern, and Ross and Ronan Ryan.

The two counties in the football championship with the most sets of brothers are Cavan and Tyrone. Last year’s All-Ireland champions Tyrone have Richie Donnelly at midfield kicking it into his brother Mattie in the inside line, there’s Tiernan and Conall McCann, Hugh Pat and Kieran McGeary, and Frank and Brendan Burns. The latter is currently injured but still involved with the squad.

Cavan are back in the Ulster final later this month, for the first time since 2001, and their squad contains Stephen and Niall Murray, Thomas and James Galligan, Barry and Luke Fortune, and Pierce and Stephen Smith.

The Munster football final this summer is unlikely to be overflowing with brothers in arms – at least not blood brothers. Kerry only have Adrian and Killian Spillane. Paul and Mikey Geaney are cousins. Cork have Seán and Mark White, as well as Michael and Brian Hurley as options in attack.

As for the Spillanes in Kerry, their dad Tom and uncles Pat and Mick hold the honour of claiming the most All-Ireland senior football titles won by a set of brothers – 19 in total. Pat won eight, Mick won seven, and Tom won four.

So including Roscommon’s Daly brothers, the three-brother families involved in county squads in 2019 equates to seven. Four for football, and three hurling.

Fermanagh had three sets of brothers involved this year, it used to be more but the Corrigans did not play, and Séamus Quigley did not join his brother Seán in the fold. They did though have the two McCuskers, the Cullen twins, and Ryan, Conal and Garvan Jones.

Leitrim’s only brothers came in three – Noel, Gary and Mark Plunkett. And the Wexford footballers had Tiarnan, Jim and Naomhan Rossitter before, like Fermanagh, their summer was ended last weekend in the qualifiers.

We already mentioned the three Burkes from St Thomas, while the Tipperary hurlers have a lot to be thankful to the McGrath family for. Noel, Brian and John are all involved in their senior squad. Likewise in Waterford, Stephen, Shane and Kieran Bennett are three very skilled parts of the county’s hurling panel.

So, between the final games of the round-robins in the hurling and the first provincial final of the football season, up to 53 brothers could take the field this weekend. In five matches. And who else would you want by your side, on the good days and the bad? A band of brothers will always take beating.