Kilkenny keen to maximise every possible moment of his Dublin career 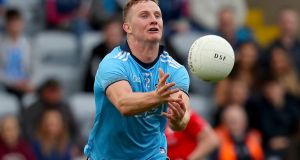 Day and night, literally, is the difference between an Aussie Rules footballer and Ciarán Kilkenny.

“Professional sports do the majority of their stuff in the morning,” said Kilkenny at the Sure Official GAA Statistics launch.

“They’re going into their club around eight o’clock in the morning and they’re leaving the club at two o’clock in the day whereas Gaelic football and hurling teams are doing the majority of their stuff at six or seven o’clock and finishing up around 10 o’clock.

“They’re paid as well but I believe that GAA players and hurlers of elite level are on a par with professionals.”

Some gentle probing for specific information followed, as Kilkenny yesterday sat among print reporters in the GAA National Games Development Centre (Abbotstown), but the 25-year-old is firmly aligned to the Jim Gavin policy of politely revealing next to nothing about the inner workings of the Dublin football team.

Not that this three-time All Star disappointed, not at all, when speaking about revisiting the landscape of a professional career he rejected despite agreeing terms with Hawthorn in 2011.

Last January, while on holidays in Australia, Kilkenny linked up with former Cavan footballer Nicholas Walsh, who currently works as programme manager for the AFL coaches association, even attending St Kilda training sessions and playing golf with Conor McKenna (Essendon via Tyrone) and Darragh Joyce (St Kilda’s via Kilkenny hurling).

On to New Zealand “for a bit of tag rugby here and there”, he returned from the month-long trip fully refreshed. That length of time away proved enough in comparison to other Dublin footballers who needed to expand their minds, and career prospects, with longer stints abroad.

The Diarmuid Connolly saga appears to be over, even if it has yet to be fully explained, but Kilkenny cites Paul Mannion’s year in China and Jack McCaffrey’s medical work in Ethiopia when asked about Rory O’Carroll’s return to Croke Park last Sunday after four years, some of which he worked in New Zealand’s female prison system.

“Rory has added great energy back into the group. He’s a very cool guy, and a really massive leader for us. “He has a very interesting job in his own right as well, and is inspiring in what he does. Him as a person, just to be back in the group is phenomenal and we’re lucky to have him.”

And still, last Sunday against Kildare, Gavin sent Philly McMahon and Eoin Murchan into the Dublin defence before turning to O’Carroll.

The 29-year-old full back made two significant defensive plays in five minutes. Kilkenny nodded when it was suggested that such acts of physicality have occurred with regularity at training in recent weeks.

“I even noticed in a gym session with him last night. I was lifting a few weights, and you can see his energy, his enthusiasm, his work rate, the competitive nature of him as well.”

Understandably, Kilkenny was hesitant to elaborate on O’Carroll’s profession bar noting he’s “a social worker by trade, working with the travelling community at the moment”.

In contrast, Kilkenny wants to spent every possible moment of his twenties in the blue jersey.

“You have to cherish it as much as you can because life is very short. You only have a limited time to play football. You look at legends. I was fortunate enough that present Dublin players were asked to carry Anton O’Toole’s coffin at his funeral.

“Just to talk to those guys [from the 1970s and 1980s] and see the friendships they have and how they still get on with each other to this day; the bond they have is special and life-changing for them. Seeing that, I want to be involved with these guys for as long as possible and play for as long as we can. Just to leave the jersey in a better place for the young lad that could be in your club that comes up to play for Dublin.”

For Kilkenny, the story of Dublin football circles around fathers and sons.

“There is a picture of the Synge Street team and you had Anton – I think [St] Vincent’s beat them – and in the background my dad was there and beside him was Maxi McMenamin, Kevin McMenamin’s dad and in the front row was Brian Scully who is Niall Scully’s dad as well. Pretty cool to see that.”

3 Serena Williams has her say on Australian Open quarantine