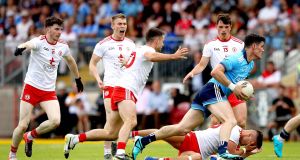 Diarmuid Connolly on his return to action for Dublin in Omagh. Photograph: Ryan Byrne/Inpho

A dispatch from through the looking glass. With 23 minutes gone in this nothing game, this unmatch, Dublin goalkeeper Even Comerford spotted the Tyrone’s midfield hadn’t quite made it back into position for a kick-out. More specifically, Richie Donnelly, who had just swung over a handsome point on the turn, was taking his moment like a University Challenge contestant who’d just got a starter question right. He all but stopped for a swig of water on his way back out.

Comerford boomed his kick-out clear over Donnelly’s head to find Cormac Costello around the midfield hash mark. The Dublin centre-forward turned and took off to find clear country ahead of him - which was strange enough in and off itself. But even stranger was what Donnelly did about it. He did nothing.

You could see him make up his mind in real time. Had this been a real quarter-final, a real game in any recognisable sense, there would have been no decision to make. But here, Donnelly - who had been playing quite well and had taken a couple of points with a certain amount of flourish - very obviously made the split-second call that this was no time to be a hero.

And he let Costello go, giving Dublin a three-on-two with the whole of the Tyrone half in front of him.

That it ultimately came to nothing was another indication of what a rum old day this was. You’d imagine Dublin don’t even practice three-on-two drills in training, so alien are they to real-match situations. Here, Costello played a one-two with Paddy Small but got too close to Tyrone keeper Benny Gallen in the process and made a hash of the chance. The scoreboard remained unmoved. As did we all.

This isn’t to single Donnelly out or to slacker-shame him in the slightest. The point is, in any normal August championship game between any two teams - not to mind last year’s All-Ireland finalists - not chasing back after a breakaway would be unthinkable. Ditto Tyrone having nobody to back him up a 60 yards of space behind their midfield. Ditto squared Dublin having a three-on-two and not coming away with a score or any stripe.

That’s just the kind of day it was. In the end, and this is purely for the sake of the archivists, Dublin came away with six points to spare. Eoghan O’Gara’s injury-time goal bumped out the margin, which had stayed reasonably steady at around three for most of the way. Had Tyrone been a little more tuned in with their shooting, they could feasibly have won. But instead, the game looked like what it was - a match on which virtually nothing depended.

Between them, the teams made 28 changes from their previous Super-8s games. Only Jonny Cooper and James McCarthy survived for the Dubs, both of whom have missed gametime this summer through injury. McCarthy sat out the second half, Cooper was gone by the 45th minute. Just as in the corresponding final Super-8 game last year, Jim Gavin didn’t give a minute’s action to any of the 10 Dublin players who’ve started every game in the championship.

Of those who did play, it was inevitable that much of the attention would centre on Diarmuid Connolly. Playing in his first championship game for Dublin since coming on in the 2017 All-Ireland final, Connolly was sited at midfield for the day. In another piece of curious unreality, Tyrone more or less left him at it out there, leaving him in a wide circle of space at all times and allowing him to spray raking passes around the place like he was running a Cúl Camp.

And he did a fine job, all in all. Of course he did - he’s Diarmuid Connolly. He took one huge catch from a Tyrone kick-out near the end of the first half that brought a lusty cheer from the Dub army behind the goal. He scored his only point of the day after a nice contribution from Bernard Brogan about a quarter of an hour from the end, to another chorus from the sizeable travelling support. And then he got a black card in the 69th minute, to a kind of unavoidable general hilarity all round.

Did any of it matter? No, it did not. As the All-Ireland is decided over the coming month, it’s hard to imagine more than a handful of those on show here will be at the coalface. Rory O’Carroll’s unsteady afternoon will hardly have done him much good and of the old-guard Dublin forwards, only Brogan looked sharp. Seán Bugler and Paddy Small did themselves no harm, all the same.

On the Tyrone side, it could be instructive that Pádraig Hamspey, Michael Cassidy and Richie Donnelly were the first three off the pitch. Cassidy had a knock to his hip but could find his way into the side for the semi-final if it doesn’t last too long into the week. Apart from throwing his hat at that kick-out, Donnelly put in a decent afternoon.

This being nominally a match report, we may as well finish with the bones. Dublin led 0-8 to 0-5 at the break, with much of their best work coming from Small who scored two points of his own and got fouled for two more. Tyrone were never able to bring the gap below two points in the second half and although both goalkeepers made fine saves at either end, we had to wait until O’Gara’s injury-time tap in after fine work from Bulger for a goal.