Everything you think you know about Mayo is wrong

Donegal feel the pain in the evening rain, as Mayo set-up semi-final showdown 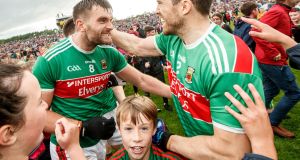 Prepare for a week in which the garlands will be flung in Mayo’s direction, lauding their courage and their heart and their willingness to empty themselves in what the country still believes to be an impossible ambition of winning an All-Ireland title. The general wisdom is that this year is it; their very last shot.

They’ve heard it all before. The only thing to remember about Mayo is that everything you know is wrong.

See, there is no sign that the Mayo players believe that anything is on the verge of finishing. There’s no word that the vast bulk of this team – the brothers O’Shea, Vaughan, Boyle, Higgins, Keegan, Parsons – are simply going to quit if it doesn’t work out over the next few weeks.

The truly frightening thing about where Mayo stand right now is that they’ll be coming back irrespective of what happens for the remainder of this championship. If you want to get to the mindset of this Mayo group, then root out your old compact disc copy of an album by two emigrant sons of Charlestown, set the volume to max and listen to Liam Gallagher snarling in full Mayo-Manc glory.

A torrential rain fell when the Donegal coach was escorted into MacHale Park before five o’clock on Saturday. At that moment, Castlebar looked like the set of Sin City. Everything was grey and drenched.

If Donegal had a sense of foreboding about this task, it was well placed. The pitch was tight. The local crowd was high-strung as a racehorse. And the pitch was greasy. You thought of all those light, lovely young Donegal forwards skating about that greasy field among those granite Mayo defenders trying to execute their game of finesse and speed. And you winced. So it went.

This was a learning experience for players like Ciarán Thompson, Jamie Brennan and Niall O’Donnell, who comprised Donegal’s very young and slick half-forward line. Their willingness to show for the ball couldn’t be faulted but as a unit they were obliterated by Mayo’s Panzer division, with James Carr and Fionn McDonagh dropping back as auxiliary marauders and completely sealing the chinks of light through which Donegal have woven gorgeous attacking moves all summer.

Here, they met bone and brawn. The football was spilled, turned over, lost. The patterns became fractured and less smooth. Everything was rushed. Confidence drained out like so much bathwater.

There’s a tendency to feel sorry for this Mayo team because they haven’t won the big one yet. Pity is the very last emotion they should elicit because Mayo are as mean as they come. Here was proof.

They devoured an attractive young Donegal team with some fava beans and a nice Chianti. From the moment Shaun Patton, Donegal’s goalkeeper, hesitated on an ill-advised ramble upfield and turned the ball over, the Mayo collective turned predator.

Patton atoned for his error with a brilliant save from Darragh Coen minutes later but the shift in attitude was visible. Mayo smelt blood. It didn’t matter to them that David Clarke was injured or that Keith Higgins was ejected on a black card after climbing all over Patrick McBrearty. They just found ways.

Cillian O’Connor missed all his gimme-frees and finished with 1-4: two fingers to the world. Their newer starters like McDonagh and Carr showed their taste for physical mayhem. They pulverised Donegal in the first half hour, leading 1-6 to 0-4. Had they taken their chances, that score could have been 2-11 after the first half hour.

Given the general malfunction through the Donegal lines, it was a miracle that they made a game of it in the second half. That was partly down to Mayo’s habitual addiction to providing gripping entertainment.

The burden on Michael Murphy to carry his county was intolerable after half-time. He did it anyway. Dogged by Lee Keegan, the Glenswilly man won an early penalty which he then converted. After that score, himself and Aidan O’Shea whaled into one another – as if the crowd was not sufficiently engaged – and far below Bonniconlan, the tectonic plates shifted.

Then, he clattered Keegan. It was a war cry. It was absurd to ask Murphy to go and beat Mayo on his own but for 10 minutes, he threatened to do just that. But even Murphy wasn’t immune to the shocking series of missed point opportunities that infected Donegal’s marksmen.

McBrearty, Murphy, Langan and Leo McLoone all missed shots they would normally chalk up as given. If they needed a sign that it wasn’t to be their night, then this was it.

Stephen McMenamin had another huge defensive hour for Donegal. There’s a sense here that he could become the new McGee; that he has learned well from the master.

Daire Ó Baoill fought hard as well as landing two big points from centre back. Overall, this was a tough lesson in what it takes to become an All-Ireland contender. They exit the championship primed to be a force over the next few years - albeit in a summer when Murphy, the boy wonder, turns 30. Irrespective of what happens in the future seasons, Donegal football people must know they are living through a golden age as defined by Murphy’s play.

So the green and red bandwagon is back on the road. It was kind of frightening to watch their metamorphosis on Saturday night, as they fed off Donegal’s increasing anxiousness and appeared to become faster, fresher, stronger and younger as the game wore on. Everyone thinks Mayo are finished? As far as they’re concerned, they are only warming up.