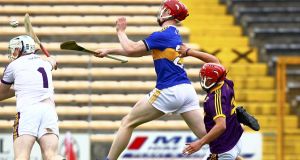 Sean Hayes scores a goal for Tipp in their thrashing of Wexford. Photograph: Ken Sutton/Inpho

The feel-good factor through Tipperary hurling continued at Nowlan Park on Sunday as their Under-20’s booked their place in the All-Ireland final with a 22 point demolition of Wexford.

The Munster champions showed no mercy and were in ominous form from the start, scoring four goals in the first 20 minutes.

“They were good goals and created well by good hard running and taking on the man,” said manager Liam Cahill.

“These guys have the quality to put them away when they get the chances so when the opportunities arise you can’t but be happy that they took them.”

Andrew Ormond bagged the first on seven minutes with the second coming at the midway point of the half when Billy Seymour caught a puckout before soloing all the way to the square before firing to the net.

The third goal came two minutes later from senior star Jake Morris after a Seymour run opened up the Wexford defence, while the fourth goal came on 20 minutes with a Jake Morris quickly taken free picking out the unmarked Ormond for his second goal.

Wexford gave themselves some hope going into half when Sean Keane Carroll beat the Tipp defence to a high ball as the Premier County led 4-6 to 1-7 at half time.

There was no let up after the break and Tipp evaporated any Wexford hope of a comeback when Jerome Cahill goaled within two minutes of the restart. Cahill bagged his second on 43 before sub Sean Hayes scores Tipp’s seventh three minutes later.

Tipp were then able to call ashore seniors Morris and Cahill going into the final quarter but they never relented, with the impressive Billy Seymour completing the goal scoring on 55 minutes as his side set up a repeat of the Munster Final against Cork when they meet in the All-Ireland final on the weekend of August 24-25th.

“It’s one that both Cork and Tipperary, and the wider general public will be looking forward to. The Munster final was a great spectacle and this is another game in this Tipp-Cork saga with these two particular teams and is going to be a great occasion and a great match,” added Liam Cahill.