Kerry have the measure of Meath in royal rumble 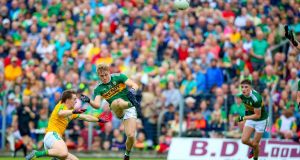 Kerry’s Killian Spillane gets his shot away under pressure from Bryan McMahon of Meath in Navan. Photograph: Tommy Dickson/Inpho

It appears there are at least two deals on offer for a place in the All-Ireland semi-final. Bluff your way in with the ghost of a hand and save your true cards until then, or be slowly forced to clean out your immediate opposition and at least walk away with a straight face.

For better or for worse Kerry made a deal on the latter here. For a so-called half-contest they found themselves having to contest almost to the full against a spirited Meath team, only playing for pride perhaps, but wearing it on their boots and their sleeves.

In the end another beautiful exhibition from Seán O’Shea made the clear difference on the end, the Kenmare man finishing with 1-8, his sweetly finished goal six minutes into the second half giving Kerry the safe cushion they sat on until the end.

At that stage Kerry needed it, Meath having drawn level a minute before, only for O’Shea’s goal to begin to take out most of Meath’s spirit. It was a super finish, defying angles and gravity to smash the Meath net from the far right of the goal. The move and, in truth, the standout memory of the match.

That also ended the game as a true contest, with that Kerry also filling out the last piece of paperwork before that next date, outscoring Meath six points to one in the last quarter.

Kerry did require something here to be sure of being sure - a draw actually sufficing - and were certainly made work a lot harder than anticipated.

Then on the final whistle, the word from MacHale Park in Castlebar and Mayo’s win over Donegal ensuring Kerry claimed the top spot in Group One, which aligns them with the runner-up team in Group Two, which will be either Dublin or Tyrone, depending on the arrivals of the ghost train from Healy Park in Omagh on Sunday afternoon.

It also sets up Kerry’s All-Ireland semi-final date, which takes place in eight days time on the Sunday August 11th, set for Croke Park at 3.30pm, which is seen to present a marginal advantage over the two teams who will contest the first semi-final next Saturday evening. That, however, remains to be seen.

What was certain is that no matter what happened up in Castlebar, Meath’s interest in the championship ended here; their opening two defeats to Donegal and then Mayo took care of that.

Still, before a decent crowd of 9,300, they gave Kerry as good as they got for most of the first half, and well into the second. Inevitably that spirit waned, but for Kerry it was certainly a more difficult work out than they would have imagined.

There was a slow intent about Peter Keane’s team, which included David Moran, back from a foot injury after missing the draw against Donegal. David Clifford didn’t start, as listed, with Michael Burns given the chance instead.

Kerry eased into a three point lead inside the first six minutes, O’Shea displaying his excellent ball control early on, only for Meath to play their way back into it, points from Bryan McMahon and Darragh Campion helping them draw level, 0-5 apiece.

That briefly sparked Kerry into another gear and Brian Ó Beaglaoich’s goal, moments after Paul Geaney missed one from close range, was impressive. Again Meath hit back, another point from McMahon and then Campion’s deftly finished goal briefly putting them in front by a point.

Kerry were having none of that, and outscored Meath 0-5 to 0-1 in the next 10 minutes, only for another late rally by the home team to reduce the gap to one at the break, 1-10 to 1-9, Meath given a pretty rapturous applause off the field.

Meath played large parts of that first half with 13 men behind the ball, intent on limiting Kerry early on, before pressing up when time and space allowed. It frequently appeared to catch Kerry off guard, but once the pressure came on in the second half, Kerry had too much up their sleeve, Moran, Killian Spillane and Geaney all adding second half scores to close out the deal.

Meath supporters stayed until the end, including six minutes of added time, to applaud their team off the field. Promotion to Division One for 2020 at least something to look forward to, while Kerry look next to Omagh.