Kerry move through the gears to book semi-final date 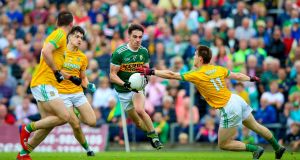 Peter Keane ducked out of the Kerry dressing room like a politician on the campaign trail. No time to lose. The questions came quick and the answers did too and in part because there’s no more intangible ground from here.

“He’ll be fine,” Keane first assured us, when asked why David Clifford had sat out the game, despite being listed to start. “He’d just a bit of a spasm in the back, he’ll be fine.”

Fine for eight days later, that is, when Kerry head straight to Croke Park as winners of Super 8s Group One – Mayo’s victory over Donegal up in Castlebar helping to ensure that – and so aligning themselves with Tyrone, the runners-up from Group Two.

From here it was straight back to the Kingdom. After taking care of Meath by eight points, outscoring them six to one in the last quarter, Kerry also gave themselves the Sunday semi-final date, with a 3.30pm throw-in. It may be a marginal advantage over the first semi-final next Saturday evening, but still no time to lose in plotting for that.

“I can only worry about ourselves,” added the Kerry manager, “but I can tell you it is tough, a long journey home after this, a quick turnaround, that’s just the nature of it. I’ve always said it’s game by game, there’s no point worrying about something down the road, we worry about the present.

“We still had to come here, do a job. There was no certainty about anything else. We expected a battle, Meath playing at home, and they have put up good performances. Recovery is the main thing, when it’s game after game. We’ll see who we get next, and we’ll worry about that from there. Okay?”

Meath did give them a little to worry about here early on, playing an ultra defensive game that tested Kerry’s patience and skill, which gradually emerged in abundance. It included another beautiful exhibition of ball striking from Seán O’Shea, the Kenmare man finishing with 1-8, his sweetly-finished goal seven minutes into the second half giving Kerry the cushion they kept softening up until the end.

Kerry also finished with seven different scorers, Tommy Walsh coming off the bench to make his strong presence felt, and that will feel stronger again when Clifford is added back to that mix.

Jason Foley, Tadhg Morley and Gavin Crowley were all sound in defence and yet Meath did ask some questions of them, if even only playing for pride – following their opening two defeats to Donegal and then Mayo.

There was a slow intent about Keane’s team, which included David Moran, back from a foot injury after missing the draw against Donegal. They eased into a three point lead inside the first six minutes, O’Shea displaying his excellent ball control early on, only for Meath to ease their way back into it, points from Bryan McMahon and Darragh Campion helping them draw level, 0-5 apiece.

That briefly sparked Kerry into another gear and Brian Ó Beaglaoich’s goal, moments after Paul Geaney missed one from close range, was impressive. Again Meath hit back, another point from McMahon and then Campion’s deftly finished goal briefly putting them in front by a point.

Kerry were having none of that, and outscored Meath five points to one in the next 10 minutes, only for another late rally by the home team to reduce the gap to one at the break, 1-10 to 1-9, Meath given a pretty rapturous applause off the field.

Then just after Meath drew level five minutes into the second half, back came O’Shea with his goal, which also killed off most of Meath’s spirit. It was a super finish, defying the angle and gravity to smash the Meath net after an approach from the right of the goal. It was the move and in truth the standout memory of the match.

From there Kerry pressed for home untroubled. Moran added a second point from play, Killian Spillane a third, and Geaney his second, to close out the deal.

After failing to progress from the Super 8s last summer, the trip back to Croke Park will present a proper tangible assessment of where exactly Keane’s young team are right now. They can certainly score, but can they hold out enough at the other end?

For Meath manager Andy McEntee the end result still brought some positives, especially with Division One football beckoning in 2020.

“It was a difficult situation, Kerry playing for All-Ireland semi-final, we’re playing for the sake of playing, putting up a performance,” he said.

“But zero complaints about the application of anybody. Their second goal was hurtful, and in the end we didn’t finish as strong as Kerry, which has been a similar pattern. We’re playing the top teams, this is our first experience, and we’ve just got to get used to living with that a little bit longer.”

While not exactly saying it, McEntee also appeared keen to be a part of it all next year too.

“Well that’s not my call, and maybe a bit early to think about, but I think it’s hugely different place now to last year, we’ve had 16 competitive games this year, and that’s been great for us, eight championship games. Last year we had two. The average age of that forward line, Bryan McMahon is the oldest at 25, that’s positive, the likes of Darragh Campion, Shane Walsh, Ethan Devine, 21 or less, that’s all positive.”