Mayo keep on keeping on to book semi-final spot 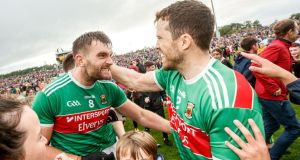 Welcome to the bear-pit. If the dream is over, then nobody told Mayo. Not even the summer rain could prevent the Mayo faithful from turning molten as the wild bunch whipped up another 70 plus minutes of beautiful and at times nonsensical chaos.

Donegal discovered, to their cost, what it is that Mayo do so well as their summer was brought to a crunching end over 77 minutes of a blink-and-you-miss-it contest. To play Mayo is to enter the fun-house. It’s to try and play football in the house of mirrors. The pitch is the same, the posts look the same but somehow, everything is different.

In other years, Mayo started with criminal slowness. Here, they had one foot in Croke Park by half-time. They hit the Ulster champions with a ferocious defensive wall which they hadn’t experienced before.

Twenty minutes in and Donegal had begun to lose their coordinates - not to mention the football with a frequency which must have bewildered them. Their only score since the seventh minute was a Michael Murphy free, a score that came with the bonus of a black card issued to Keith Higgins for climbing on Patrick McBrearty’s back after the Kilcar man gave him the slip.

But their attempts to build from the back ended when they met the Mayo threshing machine around the middle third of the field. Mayo’s defenders marked touch tight, Colm Boyle mopped up the broken ball and then the green and red army broke in waves, led by Paddy Durcan and Chris Barrett.

As predicted, Lee Keegan shadowed Michael Murphy and was back to his aggravating best. Donegal’s struggles to simply break the halfway line were so severe that Murphy had to drop back into his own full back line to play quarterback but even so, the visitors couldn’t advance. The only thing keeping Donegal alive was Mayo’s errant shooting: Cillian O’Connor couldn’t find the mark from frees and Durcan, McDonagh and Eoin O’Donoghue all hit pot-shots wide.

But that’s the thing about Mayo. They don’t care about those misses. This was Mayo in their natural habitat: thriving in organised chaos, revelling in a teak-tough game and soldered into the pulse of the local crowds, whose dial was switched to Saturday-night-berserk. By seven o’clock, the local bar managers must have been stocking up big time on the Red Bull. It was turning into one of those nights.

There was no real surprise when O’Connor ghosted behind Paddy McGrath to get a fist to Jason Doherty’s flighted ball. Was the Breaffy man shooting for a point or was it a brilliant pass? Who cared. It was Mayo opportunism. Down 1-6 to 0-3, Donegal’s summer was disintegrating in the rain on a night that, if soupy, was a gumbo soup.

There was something poignant for Donegal supporters in the sight of Murphy hammering a distant free well wide with three minutes to go in the half. The visitors had only four wides in that first period but that wasn’t a sign of their economy. It was because they couldn’t even get a look at the Mayo posts.

It was as if they ran into a wall composed of pride and hurt and, one assumes, the burning conviction that nothing is over yet for Mayo. The physical difference between the sides was striking: Donegal’s light, classy forwards were simply blown away by the collective fury of weathered Mayo defenders like Harrison and Boyle and Aidan O’Shea, who was happy to put a shift in the trenches.

As soon as Donegal’s new generation - Ciaran Thompson, Jamie Brennan and Niall O’Donnell got the ball, they were savaged. Mayo were rampant. So the finished team - yesterday’s men, all of that - were given a standing ovation at half-time. Donegal looked shattered at that moment. As far as the Everlasting in Castlebar were concerned, they have a brilliant past in front of them.

After the break, Murphy almost single-handedly dragged Donegal back into contention. He won a penalty off Lee Keegan in the 40th minute, then scored it and fired two more points from play. After his penalty, he went toe-to-toe with O’Shea and clattered into Keegan, visual aids to his younger teammates that they weren’t in Kansas or Kilmacrennan anymore.

But for the 15 minutes that Donegal generated a little bit of possession, they simply couldn’t score. They missed five of the kind of shots they had been slotting over all summer and Murphy dropped another short. It was the surest sign of a team that had been knocked out of their equilibrium in the first half and never fully recovered it.

Durcan kept Ryan McHugh under wraps and hit 0-3 himself on the break in a phenomenal hour. At one stage, a comedic series of slips and falters prevented Donegal from coming to within a single point - and a draw would have done them here. It felt fated at this stage: as if the departed members of the old gang of ‘51 had got together and caused a wee bit of mischief on the field.

But it became clear going into injury time that Donegal just couldn’t win this. Neutrals looking forward to see what they might do against Dublin will have to wait for at least another year.

Time ticked on. Mayo defended in numbers and kept their noses in front. Andy Moran, the old stager, clipped two points. Donegal’s efforts became more frantic and despairing. The end game came in the 76th minute when Fionn McDonagh found himself in acres of space and came tearing down in front of the big stand. The goal was on. Castlebar was in full meltdown by now.

McDonagh seized it up and let fly. It went narrowly wide. Nothing summed up Mayo like that moment. Nobody cared. They had found a way, again, against the odds, against the voices, against the wisdom. On they march. Dublin will probably be waiting at five o’clock in Croke Park. Expect a fair crowd from the Padraig Carney country. Expect a battle.