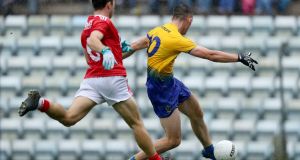 Roscommon finally broke their duck in the Super 8s at the sixth time of asking at rain-lashed Pairc Ui Rinn on Sunday.

Neither they nor Cork took any notice of this so-called ‘dead rubber’ as 13 yellow cards, three blacks and seven goals testified to a full-blooded encounter in demanding conditions.

Three second-half goals did the trick for the visitors as Brian Stack, Enda Smith and Shane Killoran rounded off patient build up play, but still Cork almost snatched a dramatic winner.

After James Loughrey punched home Cork’s third goal on the hour with Killoran following suit a minute from the end, the home side laid siege.

In the second minute of five added on, substitute Stephen Sherlock ‘s fisted effort hit ‘keeper Darren O’Malley in the chest and Roscommon, who were two points ahead, managed to clear their lines.

They made sure of victory, when substitute Donie Smith pointed in the closing act, much to the delight of their sizeable support in the attendance of 2,356.

Luke Connolly availed of a poor kick-out from keeper O’Malley to set-up Mark Collins for the first goal.

Roscommon settled with Cox’s free-taking reducing the margin to 1-3 to 0-4 after 15 minutes, but Kevin O’Driscoll and Ruairi Deane shoved Cork four ahead.

The visitors were back on level terms at 1-5 apiece 10 minutes from the interval, when Cathal Cregg sent Stack clear and he finished well.

Roscommon’s joy lasted 30 seconds, however, because Connolly made amends for missing a golden opportunity moments earlier, when he punched home an inviting Eoghan McSweeney cross.

The Connacht champions kicked the closing couple of points, including a fine effort from midfielder Killoran before Cork’s Paul Kerrigan and Roscommon’s Niall Daly were shown black cards in injury-time.

A couple of Collins frees early in the second-half kept Cork’s noses in front only for Roscommon’s greater experience to count in the end.