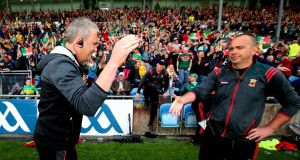 Minutes after the final whistle, the Mayo clans began to make the usual plans for an August visit to Dublin. Lodgings to secure, vintage Padden and McDonald jerseys to be ironed out – and the customary swelling hope to be dealt with.

The six-day turnaround dominated the conversation as the rain fell and the cars tried to leave MacHale Park for at least an hour after the game. But when James Horan, the manager behind this cavalcade, was asked about the demanding schedule, he didn’t blink.

“No, we don’t worry about that stuff,” Horan said airily and he couldn’t have been any more laid back had he been wearing Jeffrey Lebowski’s cardigan and sipping on a White Russian.

“There’s no point. We’ll train probably once this week and we’ll head to Dublin next Friday and look forward to the game.”

So there you have it. Just another week in the supernatural lifespan of this team. Still, the Ballintubber man has been through the ringer with this group and when he was asked if he was proud of the return the squad has given in what was their sixth game since crashing out of the Connacht championship, he asserted that he was.

“I thought the application and work-rate was superb right through. The turnovers we won in the first half and the tackles that guys put in, we didn’t get the return we should have and that’s always a concern.

“Going into the second half, we knew Donegal were going to come at us and they did. I thought they got a soft free or two, and a penalty to get them into it, but we responded very well.

“Andy Moran, Kevin McLoughlin, Fergal Boland, James Durcan when they came on, I thought they were very strong for us and gave us an out-ball. We’re delighted overall with the performance and the win.”

There was a stage in the second half when Donegal looked like a coming team again; that irresistible youth would have its say after all. Critically, Mayo never allowed their visitors to restore parity on the score board. They made them chase all the way and once they had a three-point lead in the last 10 minutes, they closed up shop.

“Just the mental strength we showed, I think,” Horan said of Mayo’s character in that period. “We were under pressure in the second half, as we knew we would be, but I thought Aidan O’Shea marshalled us very well. Chris Barrett and the guys at the back were very composed on the ball, and just kept doing the right things.”

Apart from applying the ice-packs and getting some shut eye, it’s unlikely Mayo will have much time to prepare to analyse their opponents. It was hardly worth Horan’s time high-tailing it to Omagh for Sunday’s game given that both possible opponents were likely to field shadow teams. Instead, he could look to see how Mayo could improve before next Saturday’s All-Ireland semi final.

“We rushed a couple of shots in the first half; I don’t think there’s any doubt about that, when we probably had a bit more time or one more pass. I think our return from the amount of possession we had . . . our turnovers . . . the turnovers we won were superb, but we rushed some of these shots. We had 14 wides in the first half, so that’s too many. So we’ll work on that.”

In fairness, Mayo had 14 attempts rather than wides. But Declan Bonner also had good reason to rue Donegal’s misfiring performance in the second half. Having climbed out of a first-half hole through Michael Murphy’s penalty early in the second half, their sharpshooters failed to land on five consecutive efforts and finished with eight wides in that period.

“You can’t afford to kick the wides we kicked in the second half and get a result at this level and that’s disappointing,” Bonner said.

Donegal’s veteran fullback Neil McGee was forced to withdraw minutes before throw-in. The Gweedore man’s experience and, mmh, temperament, made him a perfect defensive leader for a hellfire occasion like this and his absence was felt during that torrid first half when Donegal were reeling.

“Coming into this place here, he was a huge loss,” Bonner conceded.

“We gave him every opportunity to be ready but coming into the warm up he just didn’t feel right and he had to make a decision on it. We had trained during the week and he felt good on Wednesday night and again here yesterday evening. He felt good. Even if we got half an hour out of him but it just wasn’t to be.”

“It is hugely disappointing,” he concluded as the players filed out of the dressing room for the slow drive along the Wild Atlantic Way.

“We have been scoring all season and they were decent chances – not just one or two. It is fairly raw at the minute and will be raw for a good number of weeks. But we will get a chance to sit down and look back at it. The lads will be bitterly disappointed because we just didn’t perform, that is the bottom line and we are not going to make any excuses. We wish Mayo all the best in the All-Ireland semi-final.”

What a prospect that semi-final is now.

The brightest news for Mayo is that the totemic figures are coming back reappearing at the right time. Séamus O’Shea came through this taxing hour with no issues. Lee Keegan looked like 2017-version Keegan, as though personally rejuvenated by the thought of meeting Diarmuid Connolly again. Andy Moran fired two late points to keep Donegal pinned back. Matthew Ruane returned. And Tom Parsons is by all accounts chomping at the bit.

“Very close,” promised Horan. “He’s on the 26. You don’t put someone on the 26 for sentimental value or anything like that. So he’s very close. But Matty came on and he was mobile for us, which was the right thing at that time. He’s very close.”

Horan was also optimistic David Clarke, Donal Vaughan and Diarmuid O’Connor will be cleared for action before the visit to Dublin, deepening the options for another tilt at the impossible.