Cork boss Ephie Fitzgerald hails his side as they thrash Tyrone 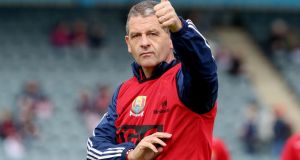 Cork manager Ephie Fitzgerald believes last week’s defeat to Armagh was a timely wake-up call for his side, but he never doubted his players’ ability to bounce back.

Last year’s beaten finalists reached the All-Ireland Senior Championship semi-finals after a comprehensive 26-point win over Tyrone at Duggan Park in Ballinasloe on Saturday. They will face either champions Dublin or Munster rivals Kerry in the last four, who meet on Monday.

Tyrone are one of three teams to have beaten Cork in the All-Ireland series since 2005 but they failed to repeat the heroics of the quarter-final in 2010.

Instead goals from Doireann O’Sullivan (two), Niamh Cotter, Eimear Scally, Eimear Kiely, Áine O’Sullivan and Saoirse Noonan helped Cork back to form following their shock loss in the final game of the round robin.

“After last week’s performance it was a blessing in disguise in terms of us coming up here prepared,” said Fitzgerald.

“We were overwhelming favourites as we were last week but when it comes to knockout football the girls are very very good.

“To put up 7-18, the second half became a bit pedestrian because of the scores, but that is good.

“We created so many chances our movement was fantastic and we are absolutely thrilled to be in the semi-final.”

Cork built up a 3-8 to 1-3 lead against the breeze in the first half and they piled on the pressure as Tyrone struggled despite a couple of Maeve Mallon efforts and another Maria Canavan goal.

But it’s Fitzgerald’s side who move into the All-Ireland senior semi-final double-header on August 25th.

“Our girls like playing in Croke Park,” said Fitzgerald.

“It’s a big pitch and we are a year older now.”

Cork haven’t claimed the Brendan Martin Cup since 2016 and lost last year’s final 3-11 to 1-12 against Dublin at Croke Park on September 16th.

That was the same day Tyrone were victorious in the intermediate decider with a big 6-8 to 1-14 victory over Meath.

In their first year back at senior level they beat Donegal in a huge result on 20 July but this All-Ireland senior quarter-final came too soon.

“The disappointing thing for me is we didn’t perform,” said Tyrone manager Gerry Moane.

“We are a lot better than that and you seen it in the last couple of games against Mayo and Donegal. We didn’t bring that to the pitch.

“But this is a young ambitious group of footballers. The age profile of the group is very low.

“We have a lot of work to do but we will back.”

Meanwhile, the All-Ireland Intermediate semi-finals will see Sligo face Tipperary, while Meath and Roscommon will meet in the second game on August 17th.