Determined Donegal have the bit between their teeth 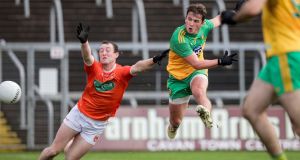 Donegal’s Peadar Mogan scores a goal despite the efforts of Armagh’s Ryan Kennedy of Armagh in the Ulster semi-final at Kingspan Breffni Park. Photograph: Inpho

When Donegal were preparing for this one, Declan Bonner could feel an “edge”. The Donegal manager wouldn’t entertain the suggestion that complacency could bite.

The win over Tyrone was only the fifth time in 158 appearances that Michael Murphy was kept scoreless. Donegal’s captain knocked over two frees against Armagh as the procession continued. Donegal’s orchestra still plays to his tune and the beats are getting louder by the week.

Donegal set the tone from the throw-in, Michael Langan striding through to score after only 11 seconds.

Armagh were briefly level after nine minutes, but Caolan McGonigle converted from a mark to open a three-point lead at the water break.

From there till the break, Donegal kicked 1-7 with a Rian O’Neill free the only response.

Donegal’s goal came from one of their new breed, Peadar Mogan. Half-time was approaching when Mogan scuttled away from Aidan Forker and tucked the ball home past Blaine Hughes.

“There’s a wee bit more bite with no safety net,” Mogan observed. “This is a great place to be in, to be able to give the people of Donegal something to smile about.”

The goal originated from Shaun Patton. The goalkeeper’s dart found Niall O’Donnell, who called a mark.

Bonner remains unconvinced by the rule. Yet, a mark played a key role in Mogan’s goal and there were converted marks from McGonigle, O’Donnell and Hugh McFadden in the first half.

“I still wouldn’t be the biggest fan of it, but it’s there to be used,” Bonner said.

Time was when Armagh had Donegal’s number regularly. Jamie Clarke danced past a dishevelled Donegal for two goals inside six minutes of a 2010 qualifier that left Donegal’s 1992 All-Ireland winning captain Anthony Molloy to suggest that “God almighty”’ would be incapable of resurrecting their fortunes.

Now, Donegal are in a ninth Ulster final in the 10 years since and are aiming to win a sixth Anglo Celtic in that period.

Patrick McBrearty was kept in reserve here, but the Kilcar man had a real purpose when sprung into action. McBrearty’s first Championship contribution of 2020 was a fisted point. By the end, Donegal had 12 points to spare and 13 players on the scoreboard, although an injury to Stephen McMemamin in the opening minutes will leave a pang of worry over the next week.

Bonner said: “It’s the work rate of the team that I was really impressed with.It was a good all-round performance from the group.”

Oisin Gallen and Andrew McClean came off the bench to score points.

It felt almost processional. Donegal were relentless with the timeless Neil McGee a real rock.

Cavan town was deserted and the lights came on in early afternoon. There could be no mistaking Donegal’s championship intent though.

Bonner said: “It’s important. If you take your feet off the gas in the Ulster championship, scores will start coming in against you fairly quickly.

“The attitude of the lads and the way that they applied themselves was very good. You could sense that in the build-up over the last ten days. There was a real edge to our training. We’ll look for that edge again for the Ulster final.”

Kieran McGeeney could never have have stood accused of being meek. That was the charge he levelled at his squad.

“It is a good lesson for the boys but it is a harsh one,” he said. “I just felt for the first time this year we were very timid and we did not have a go at them. We did not go at them and that was the most disheartening thing.”