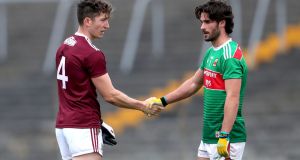 The clash of the weekend sees Galway take on Mayo in the Connacht final. Photograph: Inpho

In a different year, we’d say that Armagh are a coming team, they’ve just secured promotion to Division One, they’ll be dangerous in the qualifiers and it would be no surprise to see them in the Super-8s. But knock-out is knock-out. There’s no option for a noble defeat here for Kieran McGeeney’s side. Win or bust.

That can play in their favour. Under McGeeney, they are virtually alone among Ulster teams in not trying to play football that incorporates a heightened level of risk-taking. They have ball-playing forwards and they try to play to their strengths. It leaves them a bit shy at the back at times, relative to other Ulster teams. But they are going places.

All that said, this is probably a year too early for them. Donegal have dispatched of Tyrone, have seen Kerry go home and by the end of the weekend won’t have to worry about one or other of Galway or Mayo. The list of contenders is winnowing. They’re too good not to be on it.

Massive game for both sides, clearly. But especially Meath. Like a gymnast trying a floor routine with the high degree of difficulty, they deserve credit for a lot of their efforts this year. But this is the game where credit runs out - anything less than a win and a Leinster final appearance will take their year out at the knees. Kildare have found no kind of definable rhythm so far under Jack O’Connor but they will obviously fancy this. We’ll go for Meath. Just.

Galway, Roscommon, Dublin, Westmeath, Kildare, Laois, Meath, Kerry, Tipperary, Cork, Tyrone, Donegal, Down, Fermanagh, Cavan. A bucket list for the day we exit Level 5? Not exactly. Those 15 counties have all played in a provincial final since Mayo’s last appearance in a decider, way back in 2015.

Things have come full circle - that was the year Aidan O’Shea won an All Star at full-forward. The league game between these two last month saw him move back there to outlandish effect. One of the questions defining this encounter is what Galway have devised to handle him. And, in turn, what Mayo do if it works.

Galway have had a month to get ready. Not insignificantly, they have had their asses handed to them once already so there’s surely no chance of them coming in undercooked. The new faces in the Mayo set-up have had a dream introduction but Galway were flying under Padraic Joyce in the spring. If he has them back in that sort of fettle, they should prevail here.

This has always been the point at which we were going to find out what Down have in them. They have timed their run to this point, putting out a scratch team against Louth and hitting their stride against Fermanagh last week. They face a Cavan side playing its fifth game in five weekends so presumably Paddy Tally’s side have an edge in terms of wear-and-tear alone. Should be enough

Laois’s win over Longford got a little lost in the fog last week. It was a small epic onto itself, with Laois goalie Niall Corbet the hero pulling off two second-half saves to keep his side in it at a stage when Longford looked to be threatening to stretch clear. Their reward will presumably be the usual tanking from Dublin but there’s not much they can do about that. Laois played their part in Championship 2020. That shouldn’t go unsaid.