Davy Fitzgerald: ‘the way I was abused isn’t right and should be dealt with’ 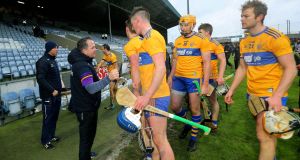 Wexford manager Davy Fitzgerald has called on the Clare County Board to take action over the verbal abuse he received from the stand as his side lost their Round 2 qualifier game to his native Clare.

Fitzgerald also gave the first indication that he may still see out his final year in his role as Wexford manager.

Following the game, Fitzgerald said: “I had to endure criticism from an unnamed individual who was seated in the stand. I call on the Clare County Board to look into the issue.

“The way I was abused today is not right and it should be dealt with,” explained the former All-Ireland winning manager with the Banner County in 2013.

“The abuse and the stuff that was thrown at me personally by one individual there today is not right and has no place in hurling.

“I would urge and encourage Clare to look at that and not let him do it to anybody else what he did there today. You can’t condone that behaviour.

“The best team won today without a shadow of a doubt,” he added.

Kelly continued his free-flowing scoring run in this year’s championship, emerging with a personal tally of 1-15. Wexford trailed by 10 points at the interval and could only reduce the deficit by three playing with the wind in the second half, failing to improve on their provincial semi-final performance in defeat to Galway.

Fitzgerald said he was touched by the Clare players who commiserated with him after the loss.

“It means a lot, anyone who has seen me play for Clare knows what it meant playing for my own county and the stick, myself and my dad (Pat, Clare GAA secretary) have taken at times is so unwarranted, it’s disgraceful, and it’s not right.

“It has to stop, end of story. There is no place for it in the GAA whatsoever. What they (Clare) did out there (the pitch) and the sideline, in fairness, was perfect.”