No sign of complacency as relentless Donegal thrash Armagh 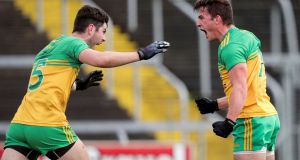 During the week, Declan Bonner didn’t want to entertain the very mention of complacency.

It was easy to see why.

“I’m reluctant even to use that word,” the Donegal manager said on Tuesday.

His side remains on course for a third-successive Ulster title as a devastating display shattered Armagh’s hopes of an upset.

Donegal were on a different level in every corner of Breffni Park.

From the moment Michael Langan opened the scoring, striding forward from the throw-up to post after just 11 seconds, the signs were ominous for the Orchard.

A pair of Rian O’Neill frees briefly drew Armagh level after nine minutes, but Caolan McGonigle’s forward mark opened a three-point lead when they huddled at the water break.

Bonner wasn’t a fan of the mark when the rule was first introduced, but his side made superb use of it, scoring three in quick succession, with Hugh McFadden and Niall O’Donnell also stroking over.

O’Neill ended a 24-minute scoreless streak for Armagh, but in the intervening period, Donegal clipped eight-in-a-row.

A minute before half-time, Peadar Mogan scorched away from Aidan Forker and Ryan Kennedy and a cool finish put Donegal ten to the good.

Ryan McHugh’s delicious point from the left-hand side put the defending Ulster champions 1-12 to 0-3 in front when David Goldrick signalled half-time.

There was a time, not too long ago, when Armagh had Donegal’s number regularly. Ten years ago, Jamie Clarke danced past a dishevelled Donegal for two goals inside six minutes of a qualifier.

Donegal felt at rock bottom, the defeat prompting 1992 All-Ireland winning captain Anthony Molloy to suggest: ‘God Almighty would not have success with that current Donegal team.’

A decade on, Donegal are are heading for their ninth Ulster final in 10 years and will be short odds to return with sixth Anglo Celt Cup.

Here, Clarke curled over in the 48th minute and it was Armagh’s first point from play.

Patrick McBrearty, kept in reserve in recent weeks due to a quad injury, came in for his first Championship action of the year and immediately added his name to the ever-expanding scoresheet.

The win over Tyrone was only the fifth time in 158 appearances that Michael Murphy was kept scoreless. Donegal’s captain knocked over two frees as the procession continued.

Donegal’s orchestra still plays to his tune. Their beats are getting louder by the week.

Substitute’s Andrew McClean and Oisin Gallen slotted over to take to 13 the number of Donegal players who registered.

It was still early afternoon when the lights came on, but by then it was lights out for Armagh.

The early enforced withdrawal of Stephen McMenamin, who seemed to injure a hamstring in the opening minutes, will be a concern, but Donegal look utterly content and controlled.

Mogan, excellent throughout, added another and Langan stroked over to complete a 12-point win.

Their supporters might have to watch from afar these days but, their interest looks likely to continue for a little while yet.