TV View: Plenty of swashbuckling football, but where was the vintage rugby? 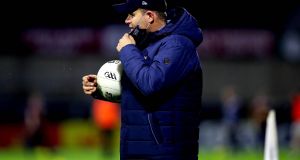 “Swashbuckling football,” said All-Ireland winning manager Jim McGuinness as Dublin drew pretty, straight-line pictures on the turf in O’Moore Park. That’s Dublin. Six passes backwards or sideways to get an attack going on the other side of the pitch, or just to move men around on the side they started and have another go from there.

Peter “the intensity of Dublin throughout was something to behold” Canavan was also a cooing fan of this year’s version of the Dubs. A digression. Canavan might think about a GoFundMe campaign to get him out of the shoebox the broadcaster has shoehorned him into. Is he in solitary? Looks like where they keep the whitewash and where the analysis screen is actually as wide as the room itself. Cat altogether, as they might say in Tyrone.

They were the only human beings in the ground, just a dark evening canopy in the background and the three lost souls talking Gaelic football

Canavan showed us a portion of the end of All-Ireland final between Dublin and Mayo where not a single Mayo player touched the ball for the last 6½ minutes. They are, it seems, where they left off, the point of difference between the new coaching philosophy of Dessie Farrell and the old one of Jim Galvin a work in progress.

“Puke football,” one of Pat Spillane’s refrains from another time, could so very easily have materialised in this winter Championship match on Sky Sports Mix as the rain fell. But no, Dublin manager Farrell wasn’t having any of that. Not a puke footballer or hurler himself, Farrell in his first outing against Westmeath will be pleased that the Ulster duet of McGuinness and Canavan was tuneful and easy on the ear.

The Donegal man, especially, purred and massaged the Dublin effort. “So smooth they were in second gear all night,” offered McGuinness, sitting on a balcony somewhere in the grounds socially distanced from man-mountain Kerry forward Kieran Donaghy and presenter Gráinne McElwain.

Given the distancing, the image was oddly one of intimacy and closeness. They were the only human beings in the ground, just a dark evening canopy in the background and the three lost souls talking Gaelic football. Welcome to the 2020 Championship.

Ciarán Kilkenny, the man of the match and five points richer than when he started, upped to the cameras and gave us a line beloved of rugby players, suggesting the elite Gaels of the county are reading the same sports psychology manuals as the boys in the RDS.

Kilkenny mentioned “the learnings from each game” that the Dubs have to take on board. Snap. But all was hunky dory with Kilkenny, keeping the tradition of the Jim Gavin years alive and well by saying little.

It was hard not to segue seamlessly to a Leinster team, who played against Ospreys on Sunday in the Pro14 League. A trophy team and one that has a lot of players from Dublin tends to draw attention. Trendsetters, winners, champions: just like the GAA lads who are looking at a skewed championship and six in a row, so Leinster are seeking four in a row.

With a young team shorn of the international brigade that will face Wales on Friday evening, Leinster brought it to Swansea and Liberty Stadium.

Unlike in O’Moore Park, where Dublin took a four-point lead and then each time Westmeath had the effrontery to close the gap, they stepped on the accelerator and sped away, Leinster spluttered with dirt in the carburettor in the early stages.

“Not the vintage Leinster,” observed Eir Sport’s Tommy Bowe, who played with Ospreys.

“No, he’s not going to be happy. Very uncharacteristic start from Leinster,” chimed Gordon D’Arcy on the likely thoughts of Leinster coach Leo Cullen.

So wanted somebody to say puke rugby. But let’s be clear. They were talking about a half-time Leinster lead of 3-1 on tries, Dave Kearney, James Tracey and Scott Penny leaving the visitors one off a bonus point. Penny bookended the half by getting binned for collapsing an attacking maul and then dotted down towards the end of the half.

Leinster were not quite the clean lines and chess moves of the Dubs. But, perhaps like the Dubs, they are measured in a different way. Cullen and Farrell, still in the foothills of a new season, both seeking the same thing.