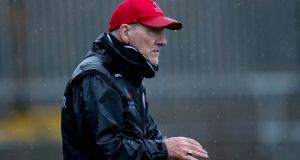 The future of Tyrone football manager Mickey Harte looks to be in jeopardy after local reports that the granting of a one-year extension to his 18-year tenure has been declined.

This expired the week before last after defeat by Donegal in the Ulster championship and the Ulster Herald has reported that the county executive is likely to invite applications from all interested candidates through the clubs.

Harte’s response to this has yet to emerge so it isn’t clear whether he intends to submit himself to competitive selection process after so long in charge and having brought unprecedented success to Tyrone, including all of the county’s three All-Ireland senior titles.

Coincidentally, the widespread speculation falls almost exactly 18 years to the day, November 14th, since he was originally appointed, having enjoyed great under-age success with Tyrone, winning All-Irelands at minor and under-21 level.

Currently the longest-serving intercounty football manager in the game. Harte has found more recent years frustrating but he has nonetheless maintained Tyrone in the front rank of teams.

In a way the news is surprising, as 2020 has been such a fractured year with the pandemic-enforced reversion to a knockout championship format removing the All-Ireland qualifier pathway, which Harte has expertly exploited down the years, capturing two of his All-Irelands, 2005 and ‘08, along the outside track.

In the past three seasons, and nine times in his 18 years in charge, Tyrone have finished the championship as Ulster’s top-ranked county regardless of who the provincial champions have been.

He also led the county to six Ulster titles and as recently as two years ago took Tyrone back to the All-Ireland final where they were beaten by Dublin’s four-in-a-row team. They were also semi-finalists last year.

If Harte were to choose to seek a new mandate, it is questionable who of his potential rivals, many of whom would have played under his management, would be happy for their names to go forward.

Former All-Ireland winning captain Peter Canavan - a selector in Fergal Logan’s management team who delivered the 2015 All-Ireland under-21 title -has already stated that he wouldn’t be interested in getting involved, as his son Darragh is now one of the county’s and the game’s up-and-coming talents.