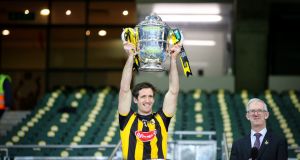 In all things, there must be a little room made for genius. Richie Hogan ended 2019 walking from the pitch in Croke Park, bitterly shaking his head after being sent off in the All-Ireland final. Anyone imagining that was him done got their answer here. And with it, a reminder that the game is still about magic.

Hogan came on 10 minutes after half-time, right in the middle of a spell where Galway looked like they were about to stretch their legs and leave Kilkenny for dust. He took a little while to get into the game but when it happened, you couldn’t take your eyes off him. He finished with 1-2 against his name, set up a nailed-on goal chance for Martin Keoghan and generally skipped around making the Galway defence look like they were trying to mow the front lawn with a threshing machine.

His goal was the kind of thing a dad does to his young lad, to remind them both that he was handy once upon a time. Hogan was second favourite to get to a loose ball in the Kilkenny full-forward line but he manged to flick it up one side of Galway goalie Éanna Ryan, run the other side of him to collect, flick it up for himself and then scoop it backwards over his shoulder into the empty net.

Never has an empty stadium felt less appropriate. We hadn’t begun to find a formulation of words to describe it to those who weren’t lucky enough to be here for it when Kilkenny had a second green flag. TJ Reid was left one-on-one at the top of the D and his sidestep and ping into the top corner would have had us raving for days if we weren’t still thinking of what Richie did.

The hurling championship had been missing an epic. It isn’t missing one any longer. Those two goals flipped this Leinster final on its head and threw the championship to the winds. Galway had been dutifully inching towards a Leinster title and then, sudden as a thunderclap, they were behind for the first time in the match. They never went ahead again.

For the first three quarters, Galway were generally the more fluent side and the stronger side. But they couldn’t shake Kilkenny off. Mostly, this was down to them giving Reid the sort of free-taking session he would award himself if he wanted to take it handy some night in Nowlan Park. He had eight frees on the scoreboard before half-time, none of them from a particularly difficult distance or angle.

Reid hadn’t been overly involved in open play at that stage and both Walter Walsh and Colin Fennelly had been kept under wraps by the Galway defence. Beyond those frees, then, it was the lesser Kilkenny lights that were keeping them in it. Eoin Cody swished a point and set up another, both times winning his own ball under pressure as Kilkenny cleared their lines. Martin Keoghan popped up off his shoulder for one, John Donnelly threw into the pot as well. Every bit of it was needed.

It meant that instead of taking what should have been a three- or four-point lead in at the break, Galway were only 0-13 to 0-12 up. They put the pedal to the metal in the third quarter alright, with Joe Canning opening his shoulders and Jason Flynn causing trouble off the bench. The usual Canning sideline put them two ahead on 48 minutes and after Flynn drew a save from Eoin Murphy soon after, a Canning 65 stretched it to three. By the time Brian Concannon swished his only score of the might on 54 minutes, Galway were five up and deservedly so.

Enter Richie. He had already sent Keoghan in for a goal chance with a gorgeous handpass and set Liam Blanchfield up for a point. But Kilkenny weren’t going to get back into this with the odd point here and the occasional set-up there. They needed goals. They got two in a minute.

Galway were shellshocked. David Burke came off the bench to nail two badly-needed points from midfield but they were listing elsewhere. Hogan stole in behind to nick another point with four minutes left - the goal was on but he narrowly cleared the crossbar. It felt right and true that the last score was his, a swirling, towering effort from out on the left.

He punched the air before the ball got within 20 yards of the posts. Redemption will take a little more than this. But it was a privilege to watch him put down such a memorable deposit.