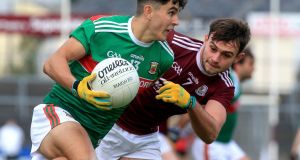 Mayo have the players to push out quickly to pressure the opposition ball carrier. Photograph: Inpho

I’m excited by the prospect of the Connacht final because I feel this game could be a circuit breaker; a clear departure from the pattern of play we have seen in this All-Ireland championship. The competition has produced some true shocks, from the dramatic exit of Monaghan to the sudden disappearance of Kerry. But what we are seeing is the same kind of play based around ball retention.

The problem for Monaghan and Kerry was that, to my mind, they over indulged in possession rather than using it purposefully to attack. Nor did they have the personnel to make that incision off their own bat when the space presented itself. So there were long periods of keep-ball in the middle third.

Looking at Galway through the national league and Mayo so far, there is the potential for a very strong kicking and running game in this match. Neither of those qualities have been evident in the championship so far. Teams are not running the ball aggressively. Transitional moments are down hugely. Ball kicked inside early has been down hugely. This game could flip all of that.

When I sat down to watch Mayo playing Roscommon last Sunday a few things struck me from James Horan’s pre-game interview. He spoke about pace and power and he said: “we have a good blend of experience there too.” It was interesting to watch the game and see this borne out. I looked at the team through that prism.

Against Galway, in the league, Mayo were very robust and aggressive. And when you go through that team - Eoghan McLaughlin has serious pace and power. The same with Lee Keegan. Oisin Mullin the same. Paddy Durcan, Stephen Coen, Matthew Ruane, Ryan O’Donoghue all the same. Mark Moran and Jordan Flynn came off the bench to add to that power dynamic.

To my mind, seven of these guys haven’t been involved previously. This is a hugely significant change in less than a season. They are big and fast and powerful and agile. That lends itself to transition football. But they have the individual capacity to create a transition out of nothing because they have that power under the bonnet.

Diarmuid O’Connor’s goal was proof of that, when you had McLaughlin injecting the pace after a switch in play. That light-switch potential could become even more significant if Mayo can get to Croke Park because the firm surface will help players like that. I just feel they are not far off Dublin’s level of conditioning. And they look like the hungriest team I have seen in this championship.

We are seeing unprecedented phases of possession of two and three minutes. It is mad

The other thing is they have both defensive shape and defensive intensity. Crucially, they are making contact. They are pushing out and putting hits in and getting turnovers rather than winning the ball through unforced errors.

They have the players to push out quickly to pressure the opposition ball carrier. Without that you end up in this monotonous shadow tackling where the other team holds the ball for minutes on end. And Horan is not settling for that. You could hear him shouting those instructions against Roscommon - to push and squeeze constantly. At the other end of the field they are going for a high press so they look to me like a team who has used this delayed season really well.

So the six defenders have the capacity to use their power. Beside Ruane at midfield they have a ball playing runner in Conor Loftus and a triangle then of aerobic players who cover a serious amount of ground - Loftus himself at 9, Diarmuid O’Connor at 10 and Kevin McLoughlin at 12. They are what I used to call aerobic animals: the workhorses.

That leaves the inside line. I think Aidan O’Shea’s presence takes a lot of pressure off Cillian O’Connor and Tommy Conroy is a natural scoring corner forward.

For me, Mayo are a much more balanced team this winter. At times in the past it seemed to me that certain Mayo players were almost too emotional and over the top in crunch moments and that led to stupid mistakes in the tackle or these wild shots. They look more structured and composed now. In a strange way, the absence of the crowd may help their cause this winter in that some of that emotion is removed.

Mayo’s aggressive offensive intent was clear from how they set up for Roscommon’s kick out, when they pressed high through zonal marking, forcing Colm Lavin to kick long, where they were committing no fewer than eight players to where the ball was landing. Despite that Roscommon still won the majority of those kick outs. That is something that could hurt them against Galway.

The only other negative was decision making. They could have had 1-15 by half time rather than 1-8 had they been more clinical. But they can work on that.

Galway are also a refreshing break from this possession game into which we have become indoctrinated. We are seeing unprecedented phases of possession of two and three minutes. It is mad but it has become the norm. Pádraic Joyce played in that direct, expressive style - the St Jarlath’s College culture with the ability to let the ball go, let it in and put the onus of forward winning it. That shapes his approach to the game. So between these two teams, I expect to see a really fast exciting game.

Galway were phenomenal throughout the league. People have forgotten that. Their potential is immense. There are a few things they absolutely have to get right on Sunday. They need to introduce more options and variety on their own kick out. And on Mayo’s kick out, they were pulled and dragged all over the field in the league game because of the man-to-man system. So I feel they should go zonal on Mayo’s kick out because they were really hurt last time out.

And then they need to get their defensive system set up. They need to get back quickly and get set up and close the gaps and still be able to do what Pádraic wants them to do - play man to man, drop off. And if they do that, then they have the players to hurt teams - Shane Walsh and Paul Conroy, in particular. And they are very strong down the middle and they are young. They can move that ball. So I think it will be a battle and fast moving: a real circuit breaker and an enjoyable game of football.

Even with everything I have said about Mayo, I think they will come through this game but it will be a tough contest. The vital difference, for me, is that Mayo may have more in the tank already. They have been out the last two weeks and their conditioning is impressive.

They have serious competition for places with the senior players now, who are bound to be revitalised by the challenge of trying to get back in the team. And they have a head of steam up. I feel they have momentum. Other than that it would be the flick of a coin. But Mayo are up and running and that might just see them back to Croke Park.