Mayo ignoring the noise with Galway in their crosshairs again 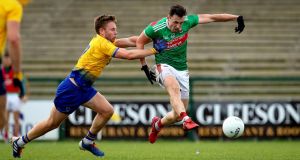 Mayo’s Diarmuid O’Connor scores the first goal of the game in their Connacht semi-final win over Roscommon. Photo: Ryan Byrne/Inpho

The dream lives on for Joe Biden’s favourite Gaelic football team. If the election to the White House of the ancestral son of Mayo is proof of anything, it is the value of sticking with it.

So Mayo made light work of Roscommon to set themselves up for an intriguing provincial final with Galway in Salthill. It will be their third championship game in as many weekends and they are gathering steam over this lightning winter All-Ireland season.

“I thought we started well and dominated a lot of the key parts of the game. If our shooting boots were on a bit better, particularly in the second quarter, I thought we could have been up by a lot more. But our energy was good,” said James Horan afterwards.

“We were excited about the challenge and well prepared for today. Every win is important and we got to introduce a lot of new guys to championship. Every game you learn something and there were things we were poor on last week that we improved on today.”

Even during the height of summer insanity, Horan has always made a point of maintaining an attitude of serenity. If the idea of Mayo as potential All-Ireland winners had fallen out of fashion last summer, they have enjoyed a revival in recent weeks. But this game had seemed fraught with danger and afterwards Horan was told that the mood around Mayo had been apprehensive. Needless to say, it was news to him and he made it clear he had not spent the sleepless nights in front of the news channels and fretting over the future of democracy. And he certainly hadn’t been exposed to Mayo’s fear of a Roscommon ambush.

“No. To be honest I haven’t a clue what is going on or what people are thinking are saying. This year more than any because we have had so much news from election to Covid and if you start taking in news your focus won’t be what it needs to be. We are a very happy bunch to be honest.”

The game felt done and dusted from the second that Diarmuid O’Connor cut behind Roscommon’s defence to finish a goal chance in the 19th minute. It completed a miserable opening spell for Anthony Cunningham’s team.

“I think it shook Roscommon a bit as well,” said Horan.

“It was just before the break and they have a very good record on not conceding goals. They did well on breaking ball in the first quarter but I felt we turned that around a bit.”

It finished 1-16 to 0-13 and wasn’t even that close. Mayo have introduced nine new players to championship football and look mobile and hungry across the field. But it’s the form of the old stagers Lee Keegan, Aidan O’Shea and Cillian O’Connor that caught the eye here while Paddy Durcan was an electrifying presence on a day badly in need of luminosity. The memory of the harrowing defeat Mayo inflicted on Galway in Tuam is fresh in the memory of all. It sets up this special edition of Galway v Mayo.