Kerry are meaner, tighter and less leaky since football came back 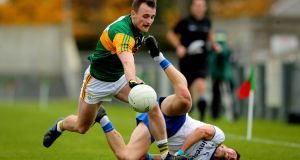 Monaghan’s Dermot Malone is beaten to the ball by Kerry’s Tom O’Sullivan during their league clash in Inniskeen. Photograph: Inpho

Just short of half-time in Kerry’s first game back after the break, they were four points up away to Monaghan and looking fairly unruffled by it all. The home side were attacking down the right-hand side in Inniskeen but with everybody except David Clifford back inside the Kerry 45, Monaghan were constantly having to turn back and recycle.

The pace and tenor of the whole scenario changed when Kieran Duffy speared a crossfield pass to Darren Hughes. Though the referee blew for a mark, the Monaghan veteran played on and with so many players sucked across to the stand side of the pitch, Kerry were suddenly facing a three-on-two. It meant Hughes was able to play Micheál Bannigan in behind with a simple ball and only the angle of crossbar and post came to Kerry’s rescue.

The passage of play is notable for a few reasons. There were three tackles in and around the Kerry 20-metre line made in the sequence, one by wing-back Gavin White and the other two by Tony Brosnan and Dara Moynihan, wearers of the number 13 and 15 jerseys on the day. After the big switch across, the last Kerry player back was Ronan Buckley, the rookie wing-forward. These are, it’s fair to say, not the locales we are used to seeing populated by Kerry forwards.

But in the context of Kerry’s new look, the incident was mostly unusual for the fact that it happened at all. It was and remains the only goal chance Kerry have given up since the restart. Though it was a fairly glaring one, it was the exception that proves the rule. Kerry are meaner, tighter and less leaky since football came back. And none of it is by accident.

As a columnist for The Kerryman, Sean O’Sullivan is one of the few former players who has managed to winkle out a seat in the stand for either of the Kerry games so far. He was in Tralee when they played Donegal a fortnight ago and though the opposition wasn’t up to much, the change in Kerry’s approach since the spring was emphatic.

“Intense would be the word I’d use to describe it,” he says. “An intensity that I wouldn’t have seen in a Kerry set-up in a long time in terms of being so organised back there. It was absolutely incessant from the throw-in to full-time, even when Kerry had the game racked up and won.

“Whether it was a kick at goal from Donegal or a delivered pass inside - which there weren’t many of those situations because Kerry didn’t give them many - it was non-stop. I’ve never seen anything like it with a Kerry team.”

For one season only, Kerry can change their philosophy without worrying about getting it in the neck from the stands

But given that there are so few games in this championship and so few opportunities to trick around with a style of play, it would be odd for Kerry to spend two games drilling one particular way of playing only to abandon it when the real stuff begins. As far as O’Sullivan can see, Keane and Griffin are bringing in a fundamental change in emphasis, one designed to suit a winter All-Ireland.

“People might not like it down here because it’s not the traditional way Kerry teams play. But I have to say, I was blown away by the structure of it and the intent in it, especially from the forwards. They absolutely work their socks off.

“There is, of course, a bit of a feeling down here that Kerry are going with the attitude of, ‘If you can’t beat them, join them.’ I know Peter had a bit of a tongue-in-cheek reply when a reporter asked will we be going with 13 behind the ball in the championship - he looked confused and said, ‘Did we have that many back there? I wasn’t counting, myself.’

After the first five rounds of the league, Kerry’s concession rate was clearly enough to ring an alarm with management. In the top two divisions, only Meath had conceded more goals. Across all four divisions, only Offaly had given up more points (white flags). They were coughing up close to 1-16 a game. Of course, they were also lying second in the table, on the back of being the only team in the country to raise 80 white flags. They are Kerry, after all.

The two games since the restart are obviously a small sample size but for what it’s worth, they gave up 0-14 against Monaghan and 0-10 against Donegal. If it was just about the numbers, you could dismiss it as not amounting to a hill of beans. But just as the set-up and structure of the team has changed, O’Sullivan can see a change in purpose too.

“They are pressing rather than falling back into zones. It’s a different thing. I don’t like comparing it to soccer but it’s similar to the high press that (Jurgen) Klopp likes for Liverpool in that the press comes from the most attacking players in the team. It’s led by attackers. Dara Moynihan, Micheál Burns, Ronan Buckley and Sean O’Shea are the key to it. It isn’t a case of everybody dropping back into a blanket defence and seeing how it turns out. There’s an aim to it.

“What I like about it is that there’s a focal point to it. Everything comes from the position of the ball on the pitch. What are we doing to pressure the ball? Any coach can send his team out with instructions to fall back when you lose possession. That’s not hard. The difference with this system is that it comes with intent and ambition to get the ball back. Kerry are going to go with it, they’re going to try it and if it leads to them giving up fewer scores, fewer goals particularly, then great.”

There is, of course, some grumbling among the natives. Wouldn’t be Kerry otherwise. But in this alternative universe championship, Keane’s team don’t get to hear it. Nobody is leaving the house, nobody is meeting people at work and, most pertinent of all, there’s nobody at the matches. For one season only, Kerry can change their philosophy without worrying about getting it in the neck from the stands.

“I’m convinced this is a big factor,” O’Sullivan says. “Absolutely. Kerry are trying a new style of play and they’re free to work on it and refine it with only themselves in the ground. The lack of a crowd is a massive shame for other reasons, obviously. We’d all love to be heading to Cork on Sunday and to be having a pint before the game and walking down to Páirc Uí Chaoimh.

“But from the point of view of Peter Keane and his players who are trying to change something fundamental, I think it’s a big plus for them. Fellas can have a go and not worry about people giving out in the crowd. It allows Kerry to play this way because supporters won’t be there to give out about it when it all gets a little bit slow and a little bit lethargic.”

Kerry are Kerry, they’ll always find a way to put up a score. Maybe this means they’ve found a clamp for the other end of the pitch. If it does, there’ll hardly be many down there who’ll hand Sam Maguire back when it’s all over.