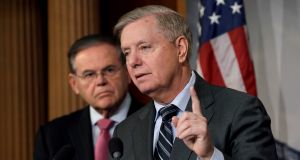 US senator Lindsey Graham: ‘There’s an allegation by the acting FBI director at the time that the deputy attorney general was basically trying to do an administrative coup.’ File photograph: Yuri Gripas/Reuters

“There’s an allegation by the acting FBI director at the time that the deputy attorney general was basically trying to do an administrative coup,” the South Carolina senator, the chair of the Senate judiciary committee, told CBS Face the Nation.

“[To] take the president down to the 25th amendment process. The deputy attorney general denies it. I promise your viewers the following, that we will have a hearing about who’s telling the truth.”

The acting FBI director referred to is Andrew McCabe, who Mr Trump fired in March 2018, just short of his intended retirement. He told CBS about the discussions, which reportedly followed the US president’s firing of FBI director James Comey in May 2017, in an interview this week to promote his new book. He also said he authorised an investigation into Mr Trump’s ties to Russia in the aftermath of Mr Comey’s firing.

The deputy attorney general is Rod Rosenstein, who wrote the memo justifying Mr Comey’s firing, which said it was due to his handling of the investigation into Hillary Clinton’s emails.

In his book, The Threat: How the FBI Protects America in the Age of Terror and Trump, Mr McCabe says Mr Trump ordered Mr Rosenstein to produce the memo, a claim the White House has denied.

Shortly after the Comey firing, Mr Trump told NBC he had acted because of “this Russia thing”, meaning Mr Comey’s involvement in the investigation of Russian election interference and links between Trump aides and Moscow.

The 25th amendment to the US constitution provides for the removal of a president deemed incapable of discharging his duties. It has never been used. Fox News reported on Saturday that James Baker, formerly a senior FBI lawyer, testified to two House committees last year that he was told Mr Rosenstein said he had found two cabinet members who would support such an effort.

The full interview with Mr McCabe was scheduled to air on 60 Minutes on Sunday night. The reporter who conducted it, Scott Pelley, said on Thursday, Mr McCabe also says Mr Rosenstein offered to wear a wire to record incriminating conversations with Mr Trump.

Mr Rosenstein has denied discussing the 25th amendment or offering to wear a wire.

Mr McCabe’s book is out on Tuesday. The Guardian obtained an early copy, in which Mr McCabe does not mention the discussions about the 25th amendment or, directly, any offer from Mr Rosenstein to wear a wire.

Mr Graham was a fierce rival of Mr Trump during the 2016 Republican primary but has become one of the president’s closest allies in power.

“I think everybody in the country needs to know if it happened,” he said. “It’s stunning to me that one of the chief law enforcement officers of the land – the acting head of the FBI – would go on national television and say, ‘Oh by the way I remember a conversation with the deputy attorney general about trying to find if we could replace the president under the 25th amendment.

Asked if he would subpoena Mr McCabe and Mr Rosenstein to appear, Mr Graham said: “How can I not, if that’s what it takes?

“I mean, you’re doing your job. The first amendment allows you to ask questions of the most powerful people in the country. I know he’s selling a book, and we need to take with a grain of salt maybe what Mr McCabe is telling us. But he went on national television and he made an accusation that floors me.

“. . . Well we’re going to find out what happened here and the only way I know to find out is to call the people in under oath and find out, through questioning, who’s telling the truth because the underlying accusation is beyond stunning.”

In the House, Democrats who took over committee chairs after the midterm elections are also planning investigations. On Saturday, Adam Schiff, the chair of the intelligence panel, and Elliot Engel of foreign affairs told Politico they were working out the best way to obtain notes taken in private meetings between Mr Trump and Russian president Vladimir Putin.

In such an atmosphere of bitter partisan rancour and startling claims of scandal, special counsel Robert Mueller is believed to be close to concluding his investigation of Russian election interference, links between Trump aides and Moscow and potential obstruction of justice by the president.

In April last year, the inspector general of the justice department faulted Mr McCabe for misleading investigators regarding unauthorised leaks to the media.

Mr Schiff was asked if he thought Mr McCabe should be charged for allegedly lying to investigators, as a number of former Trump aides have been. The former FBI official “should be held to the same standard as anyone else that the justice department has looked at”, he said. – Guardian

Uproar in US after troops deployed for inauguration forced to sleep in car park 12:45
Italy tells TikTok to block users after death of 10-year-old girl 12:22
Russian police arrest ‘over 1,000’ Navalny supporters amid nationwide rallies 10:50
Covid-19: Hong Kong locks down thousands for compulsory testing 10:49
One year on: Coming from Wuhan is now a source of pride but many remain wary 10:30