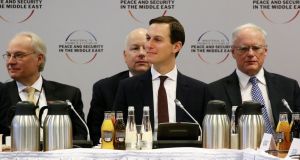 US vice-president Mike Pence has berated Washington’s EU allies over Iran during a European visit highlighting growing security and energy policy gaps between the traditional allies.

Mr Pence heads to Munich on Friday after telling a Warsaw audience how the Trump administration views ongoing EU trade with Tehran as an “effort to break American sanctions against Iran’s murderous revolutionary regime”.

“It is an ill-advised step that will only strengthen Iran, weaken the EU and create still more distance between Europe and the US,” said Mr Pence.

No European leaders were in the audience of the US-backed Middle East conference in Poland, boycotted by the Palestinians and dismissed by Tehran as a “Warsaw circus”.

Israeli prime minister Binyamin Netanyahu welcomed a gathering that brought him together for dinner in Warsaw’s Royal Palace with representatives of Arab countries with no diplomatic ties to Jerusalem.

Mr Netanyahu said foreign ministers from Saudi Arabia, the United Arab Emirates and Bahrain had “stood together and spoke with unusual force, clarity and unity against the common threat of the Iranian regime”.

“I think this marks a change and important understanding of what threatens our future, what we need to do to secure it,” he said.

The Israeli leader sparked furore in Warsaw with a tweet claiming Arab countries were discussing “war with Iran”. His officials, blaming a translation error, replaced “war” with “combatting”.

Friday’s Munich Security Conference audience, including 35 heads of state and government, is braced for more robust remarks from Mr Pence. In Warsaw, he praised US partners for reducing Iranian oil imports while “leading European partners have not been nearly as co-operative”.

Mr Trump cancelled US involvement in what he called a “terrible” Obama-era deal.

EU member states, represented in Warsaw by ambassadors and low-level officials, have tried to work around sanctions to maintain a deal which limits Iran’s nuclear programme in return for sanctions relief.

Walking a delicate line was conference host Poland, anxious for a closer strategic relationship with the US while continuing to back a nuclear deal that UN inspectors say Iran is honouring.

Talk in Warsaw focused on the future of US involvement in Syria. Secretary of state Mike Pompeo insisted the US would remain committed to Syria, despite its planned troop withdrawal, and welcomed the meeting of Arab and Israeli officials as a meeting of minds on “real threats” in the region.

At a closed-door event during the Warsaw conference, Jared Kushner, US president Donald Trump’s son-in-law, reportedly said Israelis and Palestinians would have to compromise in the administration’s peace plan, to be presented after April’s election in Israel.

Leading the Europeans in Munich is chancellor Angela Merkel, who will meet Mr Pence and House of Representatives speaker Nancy Pelosi.

A major bone of contention at the Munich gathering will be the Nord Stream 2 pipeline, transporting Russian gas to Europe under the Baltic Sea.

The US, anxious to sell Europe liquefied gas won from fracking, insists the pipeline will increase German energy dependency on Russia. Its robust line on Nord Stream, backed up by threats to participating companies, has been welcomed by Poland and Ukraine They fear the new pipeline – bypassing existing gas routes – will allow Moscow to use energy as a weapon.

But Berlin refuses to change course and Dr Merkel’s successor as Christian Democratic Union leader said on Thursday she would stand by Nord Stream 2, even though it wasn’t “close to my heart”.

“There are contracts and permits,” said Annegret Kramp-Karrenbauer. “I have no time for a style of politics that announces energetically in public what should be done even though the contractual situation is clear.”