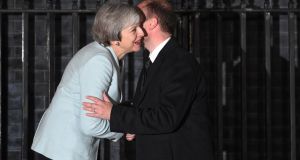 Theresa May hopes to convince the House of Commons on Tuesday to give her another fortnight’s grace to keep pushing for changes to the Irish backstop – despite the insistence of EU negotiator Michel Barnier that it is Britain that must now compromise.

With 45 days to go until the UK is due by law to leave the EU, with or without a deal, the British prime minister will address MPs about progress in the Brexit talks, No 10 Downing Street said on Monday.

She is unlikely to signal any shift towards a closer future relationship with the EU, after writing to Jeremy Corbyn to underline her continued objections to a customs union, and instead she will focus on the backstop.

Instead, Mrs May will stress her continued focus on the backstop. However, the EU’s chief negotiator insisted on Monday there was no question of Brussels giving in to Downing Street’s demands.

“We’re waiting for clarity and movement from the United Kingdom, ” Mr Barnier told reporters after talks in Luxembourg with the country’s prime minister, Xavier Bettel.

At a dinner with Mr Barnier in Brussels later on Monday, the UK’s Brexit secretary, Stephen Barclay, was expected to push Mrs May’s calls for a time limit on the backstop, a unilateral exit mechanism or its replacement with an “alternative arrangement”.

Mr Barnier suggested he would offer Mr Barclay little succour. “Tonight I will repeat the EU’s positions. I will listen to what the secretary of state has to tell us concerning the alternative arrangements which the UK would like,” Mr Barnier said. “But it’s not more than a concept today. I will also evaluate the interest from the UK side for possible changes to the political declaration, which, let me remind you, fixes the outline quite precisely for the future separation.”

Mr Barclay will travel to Strasbourg on Tuesday to set out the UK’s stance to MEPs, and the foreign secretary, Jeremy Hunt, will take the same message to Paris.

In Westminster, meanwhile, Mrs May is expected to confirm she will hold another Brexit vote in parliament on February 27th.

Opponents of a no-deal Brexit inside her cabinet and on the Tory back benches want to hear confirmation from the prime minister that any motion she tables then will be amendable.

That would allow them to have another attempt at winning a majority for an amendment that could force the prime minister’s hand – if she has not brought a reworked version of her Brexit deal back to parliament for MPs’ approval before then.

Mrs May’s hopes of cobbling together a majority were boosted on Monday as the former foreign secretary Boris Johnson said he would be willing to accept a deal with a time-limited backstop.

Mr Johnson told a meeting in parliament, “I think it must be pretty obvious that if you are going to have a time limit to the backstop – and I think that would be very good – it has got to fall before the next election.”

Some more hardline Brexiters have suggested the backstop must be removed altogether from the withdrawal agreement, but that looks highly unlikely to win favour in Brussels. Downing Street hopes that if Mrs May can win round Mr Johnson, she can split the leave-supporting European Research Group (ERG). – Guardian