Trump says officials will look for ‘landmines’ in funding legislation 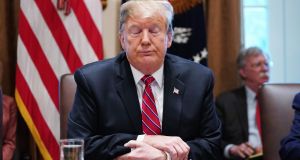 US president Donald Trump said he had “lots of options” in relation to funding a border wall. Photograph: Mandel Ngan/AFP/Getty Images

The House of Representatives expects to vote on Thursday on a new funding Bill that will avoid a US government shutdown later this week, as last-minute negotiations continued in Congress on Wednesday.

Asked if he would sign the Bill, President Donald Trump repeatedly said that he had not yet received it, but added that he did not want to see a shutdown.

“A shutdown would be a terrible thing. I think a point was made with the last shutdown; people realised how bad the border is, how unsafe the border is. I think a lot of good points were made, but I don’t want to see another one – there’s no reason for it. We’re going to look at the legislation when it comes and I’ll make a determination then,” he said.

Mr Trump was speaking to reporters as he met with Columbian president Iván Duque Márquez in the Oval Office to discuss Venezuela and other matters.

He said his officials would be looking for “landmines” in any funding legislation that is passed to him for signing.

Asked if he would accept less money for his proposed border wall than the $5.7 billion he has been demanding, Mr Trump stressed that he had “lots of options” in terms of funding.

“Regardless of what I do, we already have, as you know, a lot of money where we’re building existing wall with existing funds,” he said, stating that activity was happening at the border area “at a really rapid pace”.

“We’re giving out contracts right now, and we’re going to have a great wall,” he said. “It’s going to be a great powerful wall. People will not be able to get through that wall very easily.”

The Bill currently under discussion in Congress includes $1.375 billion for a physical border – far less than the $5.7 billion demanded by Mr Trump for his proposed wall with Mexico.

But the White House is said to be considering reallocating funds from other sources – for example, Pentagon money that has been allocated for counter-narcotics initiatives. Some of these sources of funding may be invoked by the president without the declaration of a national emergency, it is understood.

As behind-the-scenes negotiations on the new funding Bill continued in Washington, vice-president Mike Pence and other senior members of the Trump administration arrived in Warsaw for a US-led conference on the Middle East.

With much of the conference focusing on the threat posed by Iran, many European powers have effectively boycotted the event, reflecting the deep divisions between European Union member states and the United States over the Iran deal, following the Trump administration’s decision to withdraw from the 2015 agreement last year. France and Germany have sent senior diplomats rather than foreign ministers to the conference. Russia, which plays a central role in the region, is also notably absent at the event.

But many Arab states and Israel are in attendance.

The conference began amid reports of a suicide bomb which killed 41 members of the Islamic Revolutionary Guards Corps in the southeast of the country on Thursday – one of the deadliest attacks in Iran in years.

Meanwhile, US authorities charged a former air force intelligence officer with helping Iran launch a cybersecurity operation in the US. Monica Witt (39) is accused of passing information related to eight of her former colleagues to Iran after defecting to the country in 2013.