Amazon officially announced that it will put a major corporate outpost in the New York neighbourhood of Long Island City. Here is what the Queens enclave has to offer the tech giant. Video: New York Times 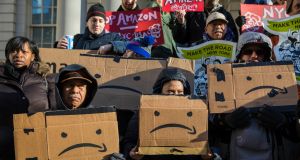 Amazon is pulling out of its plan to build a second headquarters in New York following widespread local resistance to the project.

But the decision represents a big win for local campaigners and politicians who opposed the project, fearing its impact on property prices and services in the local community.

The retail giant announced late last year that it had selected Long Island City in New York, and Arlington in Virginia as the locations for its new headquarters following an extensive search. During the year-long process more than 230 cities across the United States competed for the contract, offering Amazon lucrative tax breaks and financial incentives to lure the company.

But while the investment announcement was broadly welcomed in Arlington, the issue bitterly divided New Yorkers, becoming a lightning rod for the debate about the value and impact of investment by giant internet companies in already crowded urban areas.

Amazon had promised 25,000 new jobs in New York and in Arlington, and had already began to advertise for the new positions.

Anything is possible: today was the day a group of dedicated, everyday New Yorkers & their neighbors defeated Amazon’s corporate greed, its worker exploitation, and the power of the richest man in the world. https://t.co/nyvm5vtH9k

But resistance to the project had intensified in New York towards the end of last year, with political figures such as newly-elected congresswoman Alexandria Ocasio-Cortez opposing the move, and questioning why New York state had offered the company up to $1.7 billion (€1.5 billion) in tax breaks and other incentives.

Ms Ocasio-Cortez welcomed the announcement on Twitter: “Anything is possible: today was the day a group of dedicated, everyday New Yorkers & their neighbors defeated Amazon’s corporate greed, its worker exploitation, and the power of the richest man in the world.”

Mr Cuomo argued that the investment would provide a revenue boost of $27.5 billion for New York state and city over the next 25 years.

The appointment of a high-profile critic of the Amazon scheme, Michael Gianaris, to a state review board that could veto the deal added to concerns about the viability of the plant.

In a statement on Thursday, Amazon confirmed its withdrawal from the project. “After much thought and deliberation, we’ve decided not to move forward with our plans to build a headquarters for Amazon in Long Island City, Queens,” the company said in a statement.

Noting that 70 per cent of New Yorkers supported the plans, according to polls, the company said that its commitment to build a new headquarters “requires positive, collaborative relationships with state and local elected officials who will be supportive over the long-term”.

“We are disappointed to have reached this conclusion – we love New York, its incomparable dynamism, people, and culture – and particularly the community of Long Island City, where we have gotten to know so many optimistic, forward-leaning community leaders, small business owners, and residents.”

The company said it does not intend to reopen the search for a headquarters at this time, suggesting that it will choose one of the locations it considered during its country-wide search last year.

Amazon was founded in Seattle by Jeff Bezos, widely regarded as the richest person in the world.

The company was valued at $1 trillion in September last year. It recently acquired Whole Foods, the upmarket US grocery chain, in a move that increased its control of the US consumer market.