US president Donald Trump said on Friday he will declare a national emergency at the US-Mexico border. Video: The White House 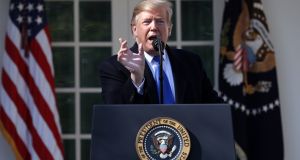 US president Donald Trump has confirmed he is declaring a national emergency in order to circumvent Congress and tap funds to build a wall on the US southern border to counter immigration.

In an announcement in the White House Rose Garden on Friday, Mr Trump said: “I’m going to be signing a national emergency. We’re talking about an invasion of our country with drugs, with human traffickers, with all types of criminals and gangs.”

Later on Friday, the president signed the spending Bill that was endorsed by the Senate and the House of Representatives in votes on Thursday night and will avoid a government shutdown from taking effect from midnight on Saturday. The Bill contains $1.375 billion (about $1.22 billion) in funding for 89km of border barrier.

However, during the Rose Garden event the president announced he will tap up to an additional $6.6 billion in funding for a border wall, one of his key 2016 campaign promises, through other executive actions, including by declaring a national emergency.

The administration intends to declare a national emergency to redirect $3.5 billion in funds already approved by Congress for the military construction budget. In addition, the president will use his executive authority to reallocate $600 million from the treasury department’s drug forfeiture programme, and $2.5 billion from the department of defence’s anti-drugs programmes.

The use of presidential powers to declare a national emergency over immigration is unprecedented. Mr Trump has consistently described the situation at the US’s southern border as a national security crisis, arguing that a border wall is needed. But Congress has refused to fully fund the wall, an impasse which led to last month’s 35-day partial government shutdown.

While US presidents have the authority to declare national emergencies, typically they are reserved for matters where there is broad agreement with Congress, such as after the September 11th attacks.

President @realDonaldTrump signs the Declaration for a National Emergency to address the national security and humanitarian crisis at the Southern Border. pic.twitter.com/0bUhudtwvS

The audacious proposal to build a border wall with Mexico by declaring a national emergency sets up the White House for a major constitutional battle with Congress and will almost certainly face legal challenges.

Mr Trump appeared to admit as much as he made the announcement on Friday, saying that “hopefully we’ll get a fair shake” if the case goes to the supreme court.

In a joint statement shortly before the president’s announcement, Democratic House speaker Nancy Pelosi and Senate minority leader Chuck Schumer said that the declaration of a national emergency would be “a lawless act, a gross abuse of the power of the presidency and a desperate attempt to distract” from Mr Trump’s failure to force Mexico to pay for the wall.

“Congress will defend our constitutional authorities,” they said.

“The president is not above the law. The Congress cannot let the president shred the constitution.”

But acting White House chief of staff Mick Mulvaney told reporters ahead of the announcement that there was nothing unprecedented about the president’s move, noting that all presidents since 1976 had declared national emergencies about various matters.

Nonetheless, the issue has divided Republicans. Many fear that it sets a dangerous precedent that could be used by Democratic presidents in the future. Ms Pelosi suggested on Thursday that future presidents could choose to declare a national emergency over an issue such as gun crime, for example.

But some Republicans backed the president. “I think he has all the legal authority in the world to do this and I’ll stand behind him,” said senator Lindsey Graham.

Despite widespread opposition in Congress to proclaiming an emergency, Mr Trump is under pressure to act unilaterally to soothe his conservative base and avoid looking like he has surrendered in his wall battle.

In other news, White House press secretary Sarah Sanders said on Friday she had been interviewed by special counsel Robert Mueller, who is investigating Russia’s alleged interference in the 2016 US presidential election.

“The president urged me, like he has everyone in the administration, to fully co-operate with the special counsel. I was happy to voluntarily sit down with him,” Ms Sanders said in a statement provided to Reuters. The statement was first reported by CNN.

1 With Lincoln looking on, the crowd dropped to their knees as 7pm approached
2 Covid-19: Harris urges people not to think it’s ‘mission accomplished’ ahead of next phase
3 Luke ‘Ming’ Flanagan bares his bottom half to European Parliament
4 Sweden should have done more to combat coronavirus, health chief says
5 Church of England rules Irish inscription on grave stone must have translation
Real news has value SUBSCRIBE