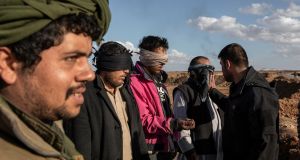 Men who had been arrested by Syrian Democratic Forces soldiers over suspected links to the Islamic State are held in Deir al-Zour province, in Syria, on January 30th. US president Donald Trump’s abrupt decision to withdraw US troops from northern Syria provoked widespread fears over aresurgence of the Islamic State. Photograph: New York Times

Germany can take back Islamic State fighters captured in Syria only if the suspects have consular access, the interior ministry said on Sunday, playing down the likelihood of Berlin meeting demands made by US president Donald Trump to his European allies.

The statement comes after US president Donald Trump has asked his European allies to “take back over 800” Islamic State fighters captured in Syria and put them on trial.

“The Caliphate is ready to fall,” the US president said in a tweet. “The alternative is not a good one in that we will be forced to release them . . . ”

It came as US-backed fighters in Syria were poised to capture Isis’s last, tiny enclave on the Euphrates, the battle commander said on Saturday night, bringing its self-declared caliphate to the brink of total defeat.

“In principle, all German citizens and those suspected of having fought for so-called IS have the right to return,” said a spokeswoman for Germany’s interior ministry, adding, however, that the condition for that was consular access for suspects.

She said Iraq had shown an interest in having some IS fighters from Germany put on trial. “But in Syria, the German government cannot guarantee legal and consular duties for jailed German citizens due to the armed conflict there,” she said.

Some 1,050 people have travelled from Germany to the war zone in Syria and Iraq since 2013 and about a third have already returned to Germany, according to German authorities.

It is unclear if Bekmirzaev can be stripped of his Irish citizenship if the allegations against him are proven.

Several other western countries, including the UK, have introduced laws allowing the government to revoke citizenship for naturalised immigrants if they engage in terrorism.

The United States is asking Britain, France, Germany and other European allies to take back over 800 ISIS fighters that we captured in Syria and put them on trial. The Caliphate is ready to fall. The alternative is not a good one in that we will be forced to release them........

....The U.S. does not want to watch as these ISIS fighters permeate Europe, which is where they are expected to go. We do so much, and spend so much - Time for others to step up and do the job that they are so capable of doing. We are pulling back after 100% Caliphate victory!

Ireland’s Department of Justice has previously estimated that about 50 Irish citizens have travelled to Syria to fight in its civil war, many of them for extremist groups such as Islamic State.

At least three have been killed in the fighting.

A former head of the British army has said Mr Trump is right to say British Islamic State fighters held in Syria should be brought back to the UK because they are the UK’s responsibility.

Gen Lord Dannatt said it was important they are seen to be treated fairly to help prevent others being radicalised and to set an example to the rest of the world.

He told Sky’s Sophy Ridge on Sunday: “Usually I disagree with Donald Trump, but on this occasion I think he’s right.

“If there are a large number of foreign fighters in captivity in Syria who originate from countries like the UK, then they are our citizens and we have a responsibility to act responsibly towards them. That means they have got to come back to this country.”

Mr Dannatt said British Isis fighters in Syria must be subject to due process. “They have got to be held while they are talked to and if there is sufficient evidence against any of them, or many of them, they have to be put through due process and imprisoned if that is the right thing to do,” he said.

“But I think it is also important that we treat them fairly with justice and tempered with a bit of mercy as well because I think the way we treat them may well have important significance for the way other people view our society.

“We don’t want to see others radicalised and going off overseas in the future.”

Jiya Furat said the Syrian Democratic Forces had cornered the remaining militants in a neighbourhood of the village of Baghuz near the Iraqi border, under fire from all sides.

“In the coming few days, in a very short time, we will spread the good tidings to the world of the military end of Daesh,” he said, using the Arabic name for Isis.

As the SDF advanced under heavy US airstrikes in recent days, a stream of civilians fled the few square kilometres of hamlets and farmland that remained within Isis’s caliphate, along with defeated jihadists trying to escape unnoticed.

On Friday, the Guardian reported a coalition commander saying Isis fighters had shot and wounded fleeing family members trying to escape from the area.

Foreign fighters and families have featured prominently among those who have fled Baghuz.

The town had been a collection point for extremists who had fled other towns and villages across Syria and Iraq, and is thought to be the last redoubt of zealots who had fought in numerous clashes across both countries.

On Thursday, Shamima Begum (19) one of three east London schoolgirls who left the UK in 2015 to join Isis, was discovered in the al-Hawl refugee camp in north-east Syria after fleeing the enclave.

Late on Saturday Mr Trump tweeted: “The United States is asking Britain, France, Germany and other European allies to take back over 800 Isis fighters that we captured in Syria and put them on trial.”

“The US does not want to watch as these Isis fighters permeate Europe, which is where they are expected to go. We do so much, and spend so much - Time for others to step up and do the job that they are so capable of doing. We are pulling back after 100% Caliphate victory!”

Mr Trump has said he will pull US forces from Syria after Isis’s territorial defeat, raising questions over the fate of Washington’s Kurdish allies and Turkish involvement in north-east Syria. – Guardian/Reuters