Former Nevada assemblywoman Lucy Flores says Joe Biden made her feel uncomfortable by kissing her at a 2014 campaign event. The former US vice president denies any inappropriate conduct. Video: CBS This Morning 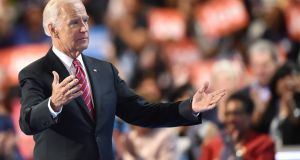 Former US vice-president Joe Biden at the Democratic National Convention in Pennsylvania in 2016. His aides he will not be dissuaded by the allegations from entering the presidential race. Photograph: Nicholas Kamm/AFP/Getty Images

Nancy Pelosi, the Democratic speaker of the US House of Representatives, offered a measured defence of Joe Biden on Tuesday, arguing that the allegations of inappropriate touching did not disqualify the former vice-president from a 2020 presidential run.

“I don’t think it’s disqualifying,” Ms Pelosi said during a live interview with Politico Playbook. “He has to understand in the world that we’re in now that people’s space is important to them, and what’s important is how they receive it and not necessarily how you intended it.”

The House speaker also gave a veiled critique of Mr Biden’s apologies, suggesting that he should say sorry for invading any accuser’s personal space rather than the fact that his accuser took offence.

Ms Pelosi, the highest-ranking Democrat in Washington, is the latest senior politician to wade into the debate over Mr Biden’s behaviour, which has become a divisive issue for the party in the wake of the MeToo movement.

In the past week, two women have come forward to say that Mr Biden’s hands-on behaviour had made them feel uncomfortable. One, Lucy Flores, a former candidate for lieutenant-governor in Nevada, said that Mr Biden planted a “big slow kiss” on the back of her head after putting his hands on her shoulders, leaning in and smelling her hair at an event five years ago – a moment that she said left her “embarrassed” and “confused”.

A second woman, Amy Lappos, described her own uncomfortable reaction to Mr Biden’s behaviour towards her at a Connecticut fundraiser in 2009.

“It wasn’t sexual, but he did grab me by the head,” Ms Lappos told the Hartford Courant, a Connecticut newspaper. “He put his hand around my neck and pulled me in to rub noses with me. When he was pulling me in, I thought he was going to kiss me on the mouth.”

Mr Biden has released multiple statements, saying he never believed that he had acted inappropriately with any woman or man, but would “listen respectfully” to any person who was offended by his behaviour. The former vice-president and senator from Delaware has yet to speak about the allegations publicly or discuss them in a video message.

The reaction to the new allegations against him has exposed a generational divide within the party. Many older Democrats have come to Mr Biden’s defence, even as others called out his behaviour as inappropriate, a sign of the new standard for male behaviour after the advent of the MeToo movement.

Tom Carper, a Democratic senator from Delaware, has said Mr Biden’s behaviour was in keeping with his home state. “Delaware is a very friendly state. Delaware is a state where its leaders hug people, men and women, young and old. We kiss babies. We do it in public.”

None of the 2020 Democratic candidates have explicitly called for Mr Biden to stay out of the presidential race. However, the vast majority said they believed Ms Flores and that her allegations reflected a new reality of which Mr Biden should be more aware.

“I believe Lucy Flores. And Joe Biden needs to give an answer,” Elizabeth Warren, the Massachusetts senator and Democratic presidential candidate, said during a campaign event in Iowa.

Mr Biden is still widely expected to move forward with a 2020 presidential bid and is looking at a potential presidential announcement later this month – making him one of the final contenders to enter the already crowded Democratic field.

Despite the lack of a formal announcement, Mr Biden continues to lead in most 2020 presidential straw polls, with Bernie Sanders, who battled Hillary Clinton for the 2016 Democratic nomination, a close second.

Yet Mr Biden’s delay in entering the race has given other competitors room to catch up in terms of name recognition and fundraising – two of Mr Biden’s inherent advantages.

On Tuesday, Mr Sanders’s campaign announced it had raised just over $18 million (€16 million) in the first quarter, the vast majority of it coming from small donations of less than $200 a piece

Kamala Harris, a senator from California, meanwhile, has raised over $12 million, while Pete Buttigieg, the Indiana mayor, who has seen a surge in the polls in recent days, has raised $7 million, significantly boosting his profile and ability to expand his campaign staff and operations. – Copyright The Financial Times Limited 2019