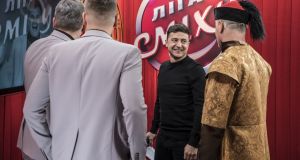 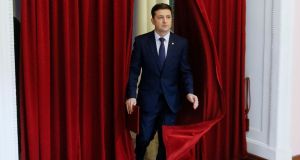 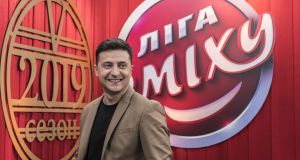 Yulia Butko is only 34 years old, but she has already supported two revolutions and is now wondering whether to back another bold response to Ukraine’s problems.

“Russia has occupied Crimea and is fighting in eastern Ukraine and we still have lots of corruption and poverty. We have big issues to solve and now maybe we’re going to elect an entertainer to be our president,” the Kiev schoolteacher says.

“Yes, it’s risky – but it might be our best chance to finally change things.”

Five years after their Maidan uprising ousted Russian-backed leader Viktor Yanukovich and 14 years on from their Orange Revolution against rigged elections, Ukrainians may take another leap of faith when they choose a president on Sunday.

Surveys favour not the incumbent Petro Poroshenko or former prime minister Yulia Tymoshenko, but a man whose closest brush with politics until now was playing a fictitious president in a television comedy show.

Volodymyr Zelenskiy (41) represents a new answer to the perennial question in Ukrainian public life: how to move beyond a largely discredited generation of politicians and the graft and cronyism that they perpetuate?

He has parlayed the popularity of his comedy sketch shows and his depiction of a hapless teacher who becomes president in the series Sluga Narodu (Servant of the People) into a bid for power that has left establishment candidates reeling.

Polls show Poroshenko and Tymoshenko – major players in politics and business for decades – scrapping for second place and a chance to prolong their political careers at least until a run-off against Zelenskiy next month.

Like the character he plays on television, Zelenskiy offers to do what an ordinary, decent person would if he suddenly found himself in power: fight corruption, improve the economy, encourage business and investment, and try to end the war with Russian-led militia in eastern Ukraine.

Delivered in jokey video clips and social media posts, his campaign messages seem to be attracting a younger generation who previously had little interest in politics, as well as middle-aged voters who are fed up with the same old faces.

“His campaign messages are strong and clear and he’s very active on social media and YouTube . . . He has invested a lot in making a cool campaign, while the others are using the same old tools – bringing people in on buses to their rallies, making promises. They seem boring in comparison,” she explains.

“People like him because he is a totally new face in politics, from outside the system. They think he has a chance to change that system – that if he’s strong enough he could do it, and they don’t believe Poroshenko or Tymoshenko would.”

There is deep disappointment in Ukraine that Poroshenko and his allies did not use the momentum of the Maidan revolution to institute the rule of law and end a system of governance based on backroom deals between politicians and tycoons.

Poroshenko, a confectionary billionaire dubbed the “chocolate king”, claims to be the only safe choice of leader for Ukraine as it enters a sixth year of war, and suggests his rivals would be a pushover for Russian president Vladimir Putin.

Having sought to bolster the status of Ukrainian and secured independence for the nation’s Orthodox Church from Moscow, Poroshenko (53) portrays himself as defender of his people under the campaign slogan “army, language, faith”.

He has dragged his heels on vital anti-graft reforms, however, and his reputation was tarnished further by recent claims that the son of a close ally was defrauding Ukraine’s army through the sale of smuggled Russian military parts.

Tymoshenko wants Poroshenko to be impeached over the allegations, and pledges to sweep clean Ukrainian politics and to cut people’s taxes and gas bills while boosting public spending – promises which chime with her reputation as a populist but would not sit well with the International Monetary Fund and Kiev’s other international creditors.

Tymoshenko (58) will put up a fierce fight – after twice serving as prime minister, twice being jailed and being hammered by Poroshenko in the 2014 presidential elections – but most polls suggest her latest comeback will end with a third-place finish in Sunday’s vote.

Zelenskiy is trying to counter concerns over his lack of experience by recruiting a team of experts and former ministers, but critics fear he would be easy meat for the big beasts of Ukrainian politics – including Ihor Kolomoisky, the oligarch whose television station airs his shows while lambasting Poroshenko.

“People seem quite tolerant of the idea that the election is a choice between one oligarch’s group and another,” Dumanska says.

“That’s not people’s main worry about Zelenskiy. They worry more about how he would represent Ukraine internationally, when our relations with the United States and European Union are so important.”