The US president is unlikely to be indicted, but some legal protections end with his term 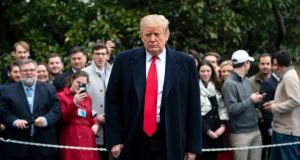 Ever since Matthew Whitaker, the former acting attorney general, said in January that the Mueller investigation was nearing completion, Washington DC has been abuzz with speculation about the status of the Mueller report.

For days, reporters have been camped out outside Robert Mueller’s office in DC, eager for signs that the former FBI director was wrapping up his work.

On Friday evening they finally got clarity. The Department of Justice confirmed that Mueller’s report into Russian interference in the 2016 election had been submitted to attorney general William Barr. While the submission of the report marks the conclusion of the investigation, it now falls to the attorney general to report to Congress on its findings.

Crucially, it remains unclear how much of the report will be made available to Congress and to the public.

In his letter to congressional leaders on Friday evening, Mr Barr promised transparency. In a joint statement released minutes later, Democratic leaders Nancy Pelosi and Chuck Schumer called for the complete report to be published. “The American people have a right to the truth,” they said.

As the American public awaits further information — perhaps as early as this weekend — what is clear is that the Mueller report is unlikely to include the same level of detail contained in Kenneth Starr’s Special Counsel report that prompted the Bill Clinton impeachment trial two decades ago. Mr Starr was seen by many to have overstepped his mandate. Mr Mueller’s report is likely to be much shorter and more concise.

This time around the Special Counsel has been working within the boundaries of a 1999 regulation which states that the special counsel must provide a “confidential report” to the attorney general on completion of his or her work. That report must explain the “prosecution or declination decisions reached by the Special Counsel” – in other words the special counsel must outline why he decided to indict some people and chose not to indict others. The attorney general is then obliged to report to Congress about the investigation.

Despite Mueller’s low-key approach to the investigation, publicly available documents and various indictments filed by the prosecutors have given a drip feed of information which have shed a light on the investigation. Since he began work, 37 individuals and entities have been indicted, most of them Russian individuals. But Mr Mueller has also indicated six people close to Donald Trump – the president’s first national security advisor Michael Flynn, former Trump campaign manager Paul Manafort and his associate Rick Gates, George Papadopolous, a foreign policy advisor to the Trump campaign, the president’s former lawyer Michael Cohen, and long-time Republican strategist Roger Stone.

Five people have been sentenced to prison, while Mr Mueller’s team have interviewed dozens of individuals connected with the president including former communications advisors Hope Hicks and Sean Spicer, and former attorney general Jeff Sessions.

Despite speculation that Mr Trump would be interviewed by Mueller’s team, he avoided a subpoena to testify publicly, as was the case with Bill Clinton, and instead provided written answers to questions posed by investigators with the help of his lawyers.

There were reports on Friday that no additional indictments would arise from the completed report. This will be a relief to Mr Trump and his family. But it does not mean Mr Trump’s troubles are over.

The Special Counsel’s task was not to decide whether to impeach Donald Trump – that will be a decision for Congress. While Democrats control the House of Representatives, Republicans control the Senate. The upper house needs a two-thirds majority to impeach a president, which means that around a dozen Republicans would have to break ranks and vote to impeach Trump, a prospect that seems unlikely currently.

Several Democrats have also expressed unease about the prospect of impeaching Trump. Earlier this month house speaker Nancy Pelosi said that “unless there’s something so compelling and overwhelming and bipartisan,” Congress should not go down the road of impeachment. Weighing on minds is the lesson of the Clinton impeachment trial 20 years ago which saw Republicans — not Mr Clinton’s party — suffer in the mid-term elections, reflecting a feeling among the electorate that Congress had overreached by impeaching the president. Even James Comey – the FBI director whose dismissal by Mr Trump led to the appointment of the Special Counsel – wrote in the New York Times this week that he hoped Trump would not be impeached arguing that a significant proportion of the electorate would see it as a coup.

But even if impeachment does not arise from the Mueller investigation, other probes are ongoing. Since regaining control of the House of Representatives following November’s mid-term elections, Democrats have ramped-up their investigations into Mr Trump.

Also worrying for Mr Trump are ongoing investigations outside Washington. The Southern District of New York is investigating Mr Trump’s alleged hush-money payments to two women who claim they had an affair with the president. Mr Trump’s charitable foundation is also under investigation, as is the inaugural committee which organised the president’s inauguration ceremony in January 2017.

Sitting presidents are protected from indictment, but this law has been challenged by some legal scholars. Once Mr Trump leaves the White House those protections will be gone. Mueller may have done his job, but for Trump the legal headaches may only be beginning.