Battling Brexit has become a full-time job for activist

Rifts stemming from referendum will last for generations, says campaigner 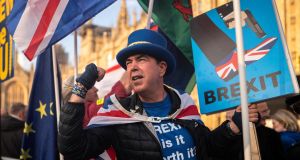 “I fell out with all my friends. They were all leavers and I binned the lot of them,” says Steve Bray. Photograph: EPA/Will Oliver

Every day on which the UK Parliament has sat since September 2017, Steve Bray has put a top hat on his head and a hybrid Union Jack/EU flag around his shoulders and travelled to College Green off Parliament Square to shout “Stop Brexit! ” at the news cameras.

On the day The Irish Times meets him he’s holding a sign featuring the word “Brexit” and a picture of a gun pointed at a Union Jack-patterned foot. He also has a huge metal loudhailer he was gifted last Christmas by a woman from Northern Ireland. As we talk, he sporadically stops to shout, “Stop Brexit” or “Revoke Article 50!” in the direction of nearby television cameras.

Since Bray started protesting at Parliament, he’s developed a bit of a following who join him every day. Other people also gather here. There’s a political artist with grotesque paintings of Boris Johnson and Theresa May (“When are you going to do one of me?” says Bray) and a Christian evangelist who bellows into a megaphone. Across the road there are the leave supporters with placards saying, “Delaying Article 50 is Betrayal” and “Trust betrayed”.

They’ve only been there for a few months, says Bray, because they see Brexit “slipping away”.

“Freedom!” shouts one of them.

“Mel Gibson won’t save you!” says the nearby evangelist, which is reasonable advice.

Everyone knows who Bray is. “Hi Laura,” he says as he passes into shot behind BBC political editor Laura Kuenssberg. He buttonholes conservative MP Justine Greening for an interview for his own Facebook channel. As we’re chatting, Bray greets Richard Tice, founder of Leave Means Leave.

When the DUP were given billions for Northern Ireland in return for supporting Theresa May, he was so incensed he decided he didn’t want to pay tax for a week

“Are we getting anywhere near the end or will we be here in a year’s time?” asks Tice.

Tice laughs and walks away. “He’s fairly amiable,” says Bray. “He invited me for Christmas mince pies at a Leave Means Leave stall. He said it would be like the World War I truce. I told him hell would freeze over first.”

Does Bray believe that Britain will never leave the EU? He hopes so, he says. “I always said the beginning of the end of Brexit would start with an extension.”

Arguing on the internet

Brexit has changed his life. He’s from South Wales and was a self-employed numismatist, which Irish Times readers will know, is a collector and dealer in coins. He was never particularly political in those days but in the run-up to the referendum he found himself arguing on the internet more and more. He felt it was incredibly complex and that people were being lied to.

“I fell out with all my friends,” he says. “They were all leavers and I binned the lot of them. They turned out to be racist and xenophobic. Lifelong friends, gone.”

He joined a more active group online and started hanging flags from bridges and slapping up “Bollocks to Brexit” stickers on walls. By February 2017 he was driving a Jacques Tilly-created Theresa May-themed float that he had crowdfunded. “It eventually fell apart,” he says. “It was not strong and stable.”

He started his vigil here, he tells me, almost by accident. When the DUP were given billions for Northern Ireland in return for supporting Theresa May, he was so incensed he decided he didn’t want to pay tax for a week. To ensure this, he slept rough in Hyde Park. At the end of that week he came here wrapped in the EU flag and hasn’t missed a day parliament has sat since then.

I’m here trying to get people around Steve to be nice. There’s a lot of aggression

How does he fund all this? Initially with money he had put aside, he says, but now he’s assisted by crowdfunding. He never really stops his activism, he says. He has lost three stone since coming here. In the evenings he watches the news, makes plans and campaigns on Facebook. He even shares his London Airbnb with a Boris Johnson impersonator.

His friends and supporters are protective of him. Elizabeth Evenden-Kenyon, a new Lib Dem candidate for Boris Johnson’s constituency, is giving out free cakes. “I’m here trying to get people around Steve to be nice. There’s a lot of aggression.”

Bray thinks that the rifts this referendum has caused will last for generations. He is often confronted by angry leave supporters. He has had death threats. He wears a body cam and a stab vest in case he’s attacked.

Does he look forward to someday returning to normal life? Yes, he says, but he thinks there’s still a lot more activism to be done. “Previously when I was on my own wheeling and dealing online, it was pretty lonely,” he says. “Through the people I’ve met here I like to think my life has improved significantly.”