Zuzana Caputova campaigned on a platform of ‘humanism, solidarity and truth’ 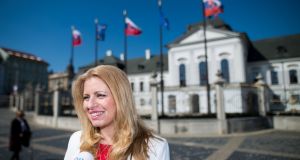 The woman who has been elected Slovakia’s first female president said her victory showed “you can win without attacking your opponents”, after fighting a positive campaign based on progressive values and political reform, and providing a rare moment of hope for liberal politics in central Europe.

Zuzana Caputova, a 45-year-old lawyer and anti-corruption campaigner, won 58.4 per cent of the votes in Saturday’s poll and will take office in June.

A political outsider who was polling in single figures a few months before the vote, her campaign used the slogan “Stand up to evil”, she eschewed personal attacks on her opponents and has spoken of the importance of the values of “humanism, solidarity and truth”.

“Let us look for what connects us. Let us promote co-operation above personal interests,” she said as the results came in and showed her on course for a comfortable victory.

“I am happy not just for the result but mainly that it is possible not to succumb to populism, to tell the truth, to raise interest without aggressive vocabulary,” she told a crowd of supporters in Bratislava.

Prior to her surprise entry into politics, Caputova was a civil activist best known for blocking a planned landfill site in her hometown in 2016. She also played a role in anti-government protests that broke out after the murder of the investigative journalist Jan Kuciak and his fiancée, Martina Kusnirova.

After topping the first round of voting two weeks ago, she comfortably won the run-off against Maros Sefcovic, an EU energy commissioner backed by the governing party Smer, an ostensibly centre-left grouping that has increasingly used right-wing populist rhetoric over recent years.

Sefcovic said during the campaign that he wanted to appeal to voters “who insist that Slovakia remain a Christian country”, an attack on Caputova’s liberal views on LGBT rights and abortion legislation.

Across central Europe, liberals have struggled to counter right-wing messaging from governments on migration and social issues. However, Caputova’s message resonated, especially in Bratislava and other cities, tapping into a frustration with career politicians among a young, well-educated demographic.

“It shows that liberals should stay liberal, and not fight propaganda with propaganda. It shows what you can do with a high-quality candidate and a good, positive campaign,” said the analyst Balazs Jarabik of the Carnegie Endowment.

However, he cautioned that Caputova’s victory came on a low turnout of just over 40 per cent, and that European elections in May and parliamentary elections next year may have a very different result.

Previously, discontent with traditional politicians in Slovakia has led to populist and extreme nationalist parties entering parliament. In one region, Banska Bystrica, the neo-fascist Marian Kotleba was elected as a regional governor in 2013, and he garnered 10 per cent of votes in the first round of the presidential race. Another candidate known for his far-right rhetoric, Stefan Harabin, won a further 14 per cent of the vote.

The hope for the region’s liberals is that discontent with the political status quo can be channelled by politicians such as Caputova rather than those of the far right.

“Zuzana Caputova gives us hope but the real fight will only come now,” wrote Dennik N, a leading opposition publication, on Sunday.

The presidency has a largely symbolic function in Slovakia, where the prime minister runs the daily business of government, but the president has significant blocking powers, appoints top judges and is commander-in-chief of the armed forces.

The outgoing president, Andrej Kiska, who has clashed with the government and been regarded as a progressive force in Slovak politics, decided not to run for a second term in office and said he welcomed the election result. “Slovakia is in a moral crisis and needs a president like Zuzana Caputova,” he told journalists in Bratislava.

He said he had called Caputova to congratulate her and also planned to send flowers. “The first female president of Slovakia deserves a bouquet,” he said.

Robert Fico, the head of the Smer party and for many years the country’s prime minister, stepped down last year in the wake of massive street protests over the Kuciak murder, but is still regarded as the most powerful politician in the country.

The Kuciak murder shocked Slovakia and put the spotlight on links between officials and corrupt networks. Police have charged five people, including a millionaire with alleged links to Smer, of ordering the killings. Caputova has promised to make changes that will strip the police and prosecutors of political influence. – Guardian

1 Coronavirus: Close cafes, restaurants, pubs and cancel all sporting events: NPHET calls for restrictions for Midlands
2 Officials refuse to rule out ‘Midlands lockdown’ following Covid-19 surge
3 Second Midlands GAA club shuts down activity after outbreak among players
4 Masks Q&A: Who has to wear them in shops and what happens if you don’t?
5 Ireland's 'R number' of almost 2 a 'serious concern' as number of new cases jumps
Real news has value SUBSCRIBE